Last night headlines began flashing that the United States was accusing Russia of testing nuclear missiles. The less abbreviated version of the news was that the U.S. government was publicly saying Russia had been violating a 1987 treaty banning the testing of ground-launched cruise missiles in a certain range class with nuclear capabilities (which is not at all the same thing as “testing nuclear missiles”).

Russia tested a ground-launched cruise missile, breaking the Intermediate-Range Nuclear Forces Treaty signed in 1987 during the Cold War, the US said. A senior US official did not provide further details on the alleged breach, but described it as “very serious”.

The bilateral agreement banned medium-range missiles with ranges between 500 and 5,500 km (300 to 3,400 miles). The Intermediate-Range Nuclear Forces Treaty was a landmark Cold War agreement. It essentially eliminated an entire, and highly controversial, class of nuclear weapons. For that reason, it still has resonance.

Digging further into the articles it became even more complicated:

This is the first time the US government has made its accusations public, though the issue has simmered for years, the BBC’s Paul Blake in Washington reports.

In January, the New York Times reported that US officials believed Russia had began testing ground-launched cruise missiles as early as 2008. The US State Department had said at the time that the issue was under review.﻿

In other words, this is not new information on a new activity, but rather a new announcement of old information on a long-running activity. In all likelihood, the information was suppressed until now for the benefit of maintaining cordial relations as far as possible. (Keep the timeline in mind when Republicans inevitably claim Obama’s purported “weakness” is somehow to blame for this development: These disallowed Russian missile tests were apparently happening since the George W. Bush Administration.)

However, good relations between the United States and Russia have gone completely out the window following the invasion and annexation of Crimea this year and Russian separatist activities in eastern and southern Ukraine. So, this announcement — while still somewhat serious — was probably just timed to accompany new sanctions and other accusations against Russia in the aftermath of the downing of Malaysia Airlines Flight 17 by Russian-backed rebels.

Other U.S. accusations this week include claims, with somewhat disputed YouTube videos and much less disputed satellite surveillance imagery, that somebody has been firing rockets at Ukrainian military positions from just inside Russia’s borders. It’s not clear whether Russia simply failed to learn the lesson about Uncle Sam’s eye-in-the-sky from Adlai Stevenson taking the Soviets to the United Nations woodshed during the 1962 Cuban Missile Crisis…

…or whether the insurgency accidentally wandered a few miles across the border with a bunch of mobile rocket launchers, given that the border in the area seems to just be vaguely in the middle of some farm fields. 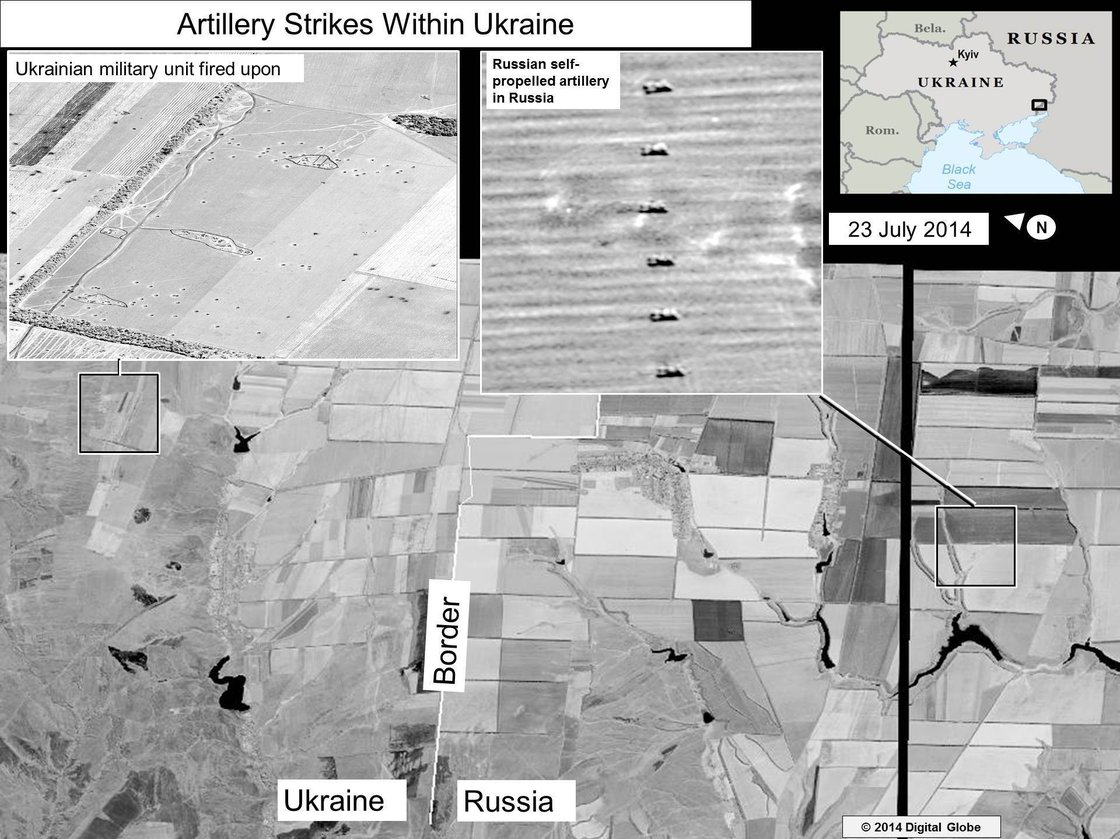 The images are attributed to the U.S. Director of National Intelligence and were taken between July 21 and July 26, officials say — days after the downing of Malaysia Airlines Flight 17.

According to The Associated Press, they “claim to show multiple rocket launchers fired at Ukrainian forces from within Ukraine and from Russian soil. One image shows dozens of craters around a Ukrainian military unit and rockets that can travel more than 7 miles.”

Meanwhile, both pro-Russian separatists in Eastern Ukraine and the Ukrainian military have been accused by human rights organizations of using highly inaccurate short-range grad rockets against populated areas, in a violation of the laws of wars (because they’re likelier to hit civilians than military targets, even where there are legitimate targets).