Russian troops under separatist flags have reportedly crossed the border into southern Donetsk oblast, in a surprise assault, and forced back Ukrainian troops that had been stationed there. The Russian units, which include tanks and artillery, are believed to be making an offensive against nearby Mariupol (about twenty miles away), the second largest city in the Donetsk Oblast, in an effort to relieve pressure on the besieged rebels in the city of Donetsk, to the north (see second map).

Donetsk Oblast: Novoazovsk and Mariupol on the Sea of Azov near the Russian border. Click to navigate.

One wonders whom the Russians believe they are fooling with the false flags. Tons of heavily equipped separatists don’t just spawn in the middle of a town next to the border like some sort of video game trigger at the edge of a map. It looks like there’s about 5 miles of highway from the Russian border to Novoazovsk. It’s not like a vast insurgency has been lying in wait there this whole time.﻿

Update: Aug 28, 2014: Latest reports indicate at least 1,000 Russian Federation troops — still marked as rebels — have entered Ukraine in the Novoazovsk area. No matter who they are, they cannot have arrived there except via Russia, based on the local geography and positions of Ukrainian forces. It is being suggested that Russia may be attempting to seize a “land bridge” to Crimea, to reduce its relative isolation from the Russian mainland. That, however, would require a far more extensive incursion, well outside the Donets Basin area that is in rebellion already.

Mariupol falling to Russian / “separatist” forces now could potentially change the balance of the war, which has slowly been tipping toward the Ukrainian nationalist side. Previously, back in May, Ukrainian ultra-billionaire Rinat Akhmetov ejected (probably actual, local) separatists from the government buildings they were “occupying” in the oblast’s second-largest city, Mariupol, and sent his own private workers to start cleaning up so local public functions could resume. He took a firm, public stance against independence or annexation to Russia. As a result, that port city on the Sea of Azov coast (see map below), has thus far been relatively removed from the center of the clashes between separatists and Ukrainian troops sent by Kiev. 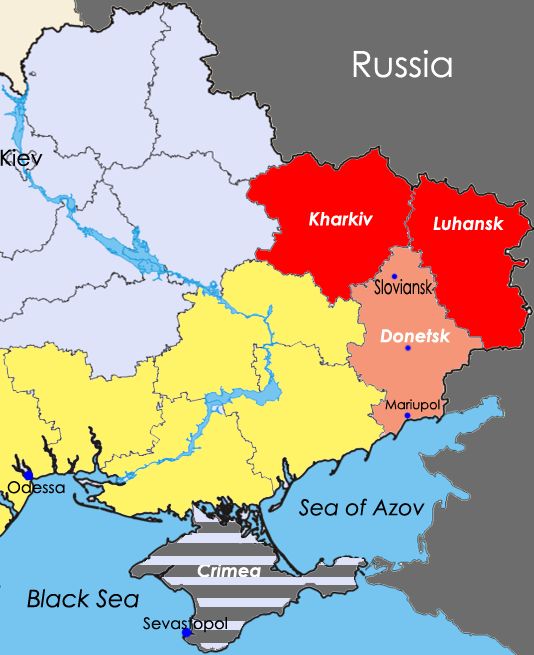