Home » Commentary » Arsenal Essay » “We are all Ukrainians” apparently now

“We are all Ukrainians” apparently now 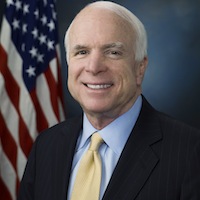 I’m sure glad we elected John McCain to be our president in 2008 or else it would be really uncomfortable every time he publicly made a comment like “We are all Ukrainians” or “I know I speak for every American when I say to him today, we are all Georgians.”


This man has yet again forced his way, very antagonistically, into another tense situation with Russia after spending years convincing Americans that he’s a foreign policy expert, despite much evidence to the contrary. Just the latest is his arrogant insertion into the Crimea powderkeg of the Ukraine crisis, where had had the nerve to jump out in front before President Obama could make an official speech on the unfolding events. TPM:

Sen. John McCain (R-AZ) declared Friday that “we are all Ukrainians” in response to the news that [pro-Russian groups] had taken over parts of Ukrainian Crimea.

“We are all Ukrainians,” McCain said in an interview with TIME magazine published Friday. The comments came ahead of President Barack Obama’s announcement that he would address the events.

McCain said that Russian President Vladimir Putin thinks “this is a chess match reminiscent of the Cold War and we need to realize that and act accordingly.”

John McCain is a Cold War dinosaur himself. He would love nothing more than for this to be some spy novel chess match in 1960s Europe. But it’s not. It’s real life and a very high stakes, dangerous situation. Russia, while diminished, is still a very heavily armed nuclear power and a resentful, angry bear that feels it has been poked and humiliated for almost 25 years. There is zero reason to antagonize Russia with absurd comments like “We are all Ukrainians.” This is especially true given the complex and confusing nature of the political crisis in Ukraine at the moment.

I don’t know where John McCain gets off telling the world he speaks for all Americans and then saying absurd things on our behalf that can hurt our foreign policy and diplomatic options. But that’s probably the goal: to constrain the U.S. into an anti-Russian posture, as he always wants.

And, yes, I know he’s not the only one. Tennessee’s Senator Bob Corker was also trying to convince us all this week that “Ukraine Could Be The Next Georgia,” a comparison aided by his convenient failure to remember who actually started the 2008 Russian-Georgian War:

“I was the first U.S. official to fly to Tbilisi when Russia went into Georgia, and the first official to go up to Gori and witness the bombings and what Russia had done with their tanks and other artillery,” Corker, the ranking member of the Senate Foreign Relations Committee, said in a breakfast meeting with reporters on Thursday. “What you see happening in Ukraine brings back those memories.”

Sure, they were mutually antagonistic toward each other, and Russia had been occupying parts of Georgia permanently since the early 1990s as a “peacekeeping force,” but in 2008 it was tiny Georgia and their pro-American delusional president (McCain’s BFF), who thought it would be wise to preemptively attack Russian positions in those occupied zones and to initiate a general war with Russia. Georgia lost very badly, as even Corker’s intentionally incomplete memories attest to. But they were also the aggressor.

So Corker’s not making wise comments on this either. And he’s joined in that by the stenographers and political arsonists over at Fox News who breathlessly reported as fact the dubious assertion by Ukrainian officials that an invasion was already under way (when so far there has only been confirmation of a resurgent presence of armed pro-Russian militias of local origin, who have always been lurking there long before the current crisis).

This screen capture of a Google News Search shows the difference between nuanced, real reporting and provocative headline-writing that is more or less false:

Nevertheless, John McCain remains the cheerleader for the loud, proud anti-Russia brigade in the U.S. Senate — even traveling in December to address the Ukrainian protesters in person. And he needs to cut that out. He’s not the president. No one authorized him to speak on our behalf. He’s making things worse by spouting off inflammatory absurdities during an already dangerous crisis.