Home » Commentary » Arsenal Essay » Ukraine: In defense of a “total war” in the east

Ukraine: In defense of a “total war” in the east

People in areas in an active state of insurrection and secession cannot reasonably expect to receive continued government services and pensions, regardless of combatant status. If they have now set their clocks to Moscow time, they can also get Moscow to replace all their abruptly deactivated ATM cards. Hundreds of thousands of people have already fled the combat zones (whether to Russia or to government areas).

Anyone left behind is effectively now a rebel sympathizer or enabler, whether explicitly, tacitly, or by continued economic activity fueling the illegal rebel regime. Economic warfare is fair game, and anyone is welcome to (attempt to) move to government-held zones and receive their benefits as promised. Or else they can tell the rebels and covert Russian Federation troops to shove off — via pressure campaigns, public protests, or any means necessary.

Rebel “authorities” have called this cessation of services and financing a “war crime” which is laughable in the extreme — and shows what a cruel joke their pretensions to independence were. The Confederacy had independent government functions and a separate monetary and fiscal system even at their worst economic point in the American Civil War and didn’t act like it was the Union’s job to keep things running. If you think you can leave the country suddenly by force, you had better be prepared to replace the services of the country you’re leaving. ﻿They have no seaport, they have lost their major airports during the fighting, and they had an already-collapsing industrial economy even before the war. Ukraine was pumping a lot of money into the region before the rebellion to keep it afloat through persistent economic depression. There’s no reason for Kiev to continue propping up their own enemies and or to make it easier for the insurrectionists to build and maintain public support.

This is particularly true when the cash-strapped Ukrainian state is turning to average citizens to arm, equip, and feed its troops and pro-unity paramilitary brigades. This is often framed in the Western media as a demonstration supporting the view that the Ukrainian armed forces are too unprepared to pull this off, but the history of revolutions and many past populist wars says otherwise. Average people are getting involved to support the war effort or fight in it, rather than leaving disconnected elites to spar with each other. The population of Ukraine, in broad terms, has rallied in a levée en masse-style mobilization of the whole society, on the home front and the battle front, to put down this absurd and transparently Russian-backed irredentism in eastern Ukraine by a radical minority faction aiming to upend two decades of growing Ukrainian national unity. A nation is being forged in battle, overcoming lingering identity crises that have divided the country in the past. Everyone now has a stake in what comes next.

Mentally, Ukraine is now ready for “total war” and the resolution of this conflict. It’s time to move forward with economic blockades and full-scale military campaigns to recapture the insurrectionist zones, come what may. This must be done to stop the formation of a new frozen conflict and the creation of a breakaway state that will permanently destabilize the independent Ukrainian state.

Perhaps this means the war will end with the recapture of a burned-out and economically devastated shell of a territory (but the preservation of territorial integrity). Or perhaps it will result in an ill-conceived outright Russian intervention and annexation (as in Crimea). Either way, it ends. But Ukraine can and likely will come out of this with a more unified state, population, and territory — whatever the outlines of it are. (Post-revolution civil wars and resistance to counter-revolutionary foreign aggression tend to have that unifying and centralizing effect, even if territory is ultimately lost in the effort.) Ukraine will be better off by resolving this once and for all than by letting it fester like the Caucasus.

Kiev gave the illegitimate rebellion a more than fair chance to stop putting their population through this experience and did as much as possible to keep the war’s pressure off the whole civilian population for as long as they could. Now it’s time to end this. 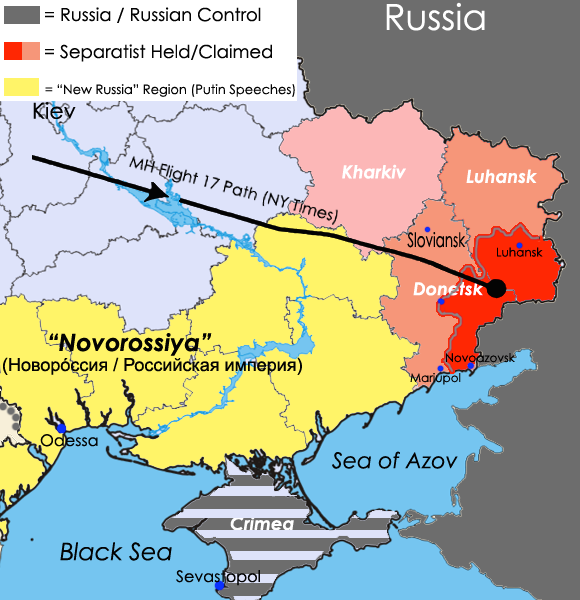