U.S. agrees to clear a “safe zone” in northern Syria

The deal being reported so far does not involve a no-fly zone against Assad, just more targeted U.S. bombing against ISIS from the air, as well as Turkish shelling (and maybe bombing) from across the border — but no ground occupation. Instead, the U.S. will provide airstrikes on behalf of Arab rebel fighters who aren’t affiliated with ISIS. That revives an old plan I’ve criticized previously, except now those fighters we would be helping are even more likely to be aligned with al Qaeda. Kurdish fighters would also be definitively excluded from assistance west of the Euphrates, it seems, to assuage Turkish antipathies.

“Details remain to be worked out, but what we are talking about with Turkey is cooperating to support partners on the ground in northern Syria who are countering ISIL,” a senior Obama administration official said, using another term for the Islamic State. “The goal is to establish an ISIL-free zone and ensure greater security and stability along Turkey’s border with Syria.”
[…]
American officials say […] that while a de facto safe zone could indeed be a byproduct of the plan, a formal no-fly zone is not part of the deal.
[…]
Instead, United States officials said Turks and Americans were working toward an agreement on the details of an operation to clear Islamic State militants from a heavily contested area roughly between the eastern outskirts of the city of Aleppo and the Euphrates River.

That is an ambitious military goal, because it appears to include areas of great strategic and symbolic importance to the Islamic State, and it could encompass areas that Syrian helicopters regularly bomb. If the zone goes 25 miles deep into Syria, as Turkish news outlets have reported, it could encompass the town of Dabiq, a significant place in the group’s apocalyptic theology, and Manbij, another stronghold. It could also include the Islamic State-held town of Al Bab, where barrel bombs dropped by Syrian aircraft have killed scores, including civilians, in recent weeks.

American officials emphasized that the depth of the buffer zone to be established was one of the important operational details that had yet to be decided. But one senior official said, “You can be assured many of the principal population centers will be covered.”

The plan does not envision Turkish ground troops entering Syria, although long-range artillery could be used across the border. Turkish ground forces would work on their side of the border to stem the Islamic State’s ability to infiltrate foreign fighters and supplies into Syria.

While it is unclear yet exactly how big the area will be, and supposedly there won’t be Turkish ground presence, I previously made a projected estimate in the following two maps (see details and analysis at “Mapping the projected Turkish occupation zone in Syria”):

Regional View: July 24, 2015 projection of the perimeter of a potential Turkish occupation zone and U.S. no-fly zone in northern Syria. Click to enlarge. 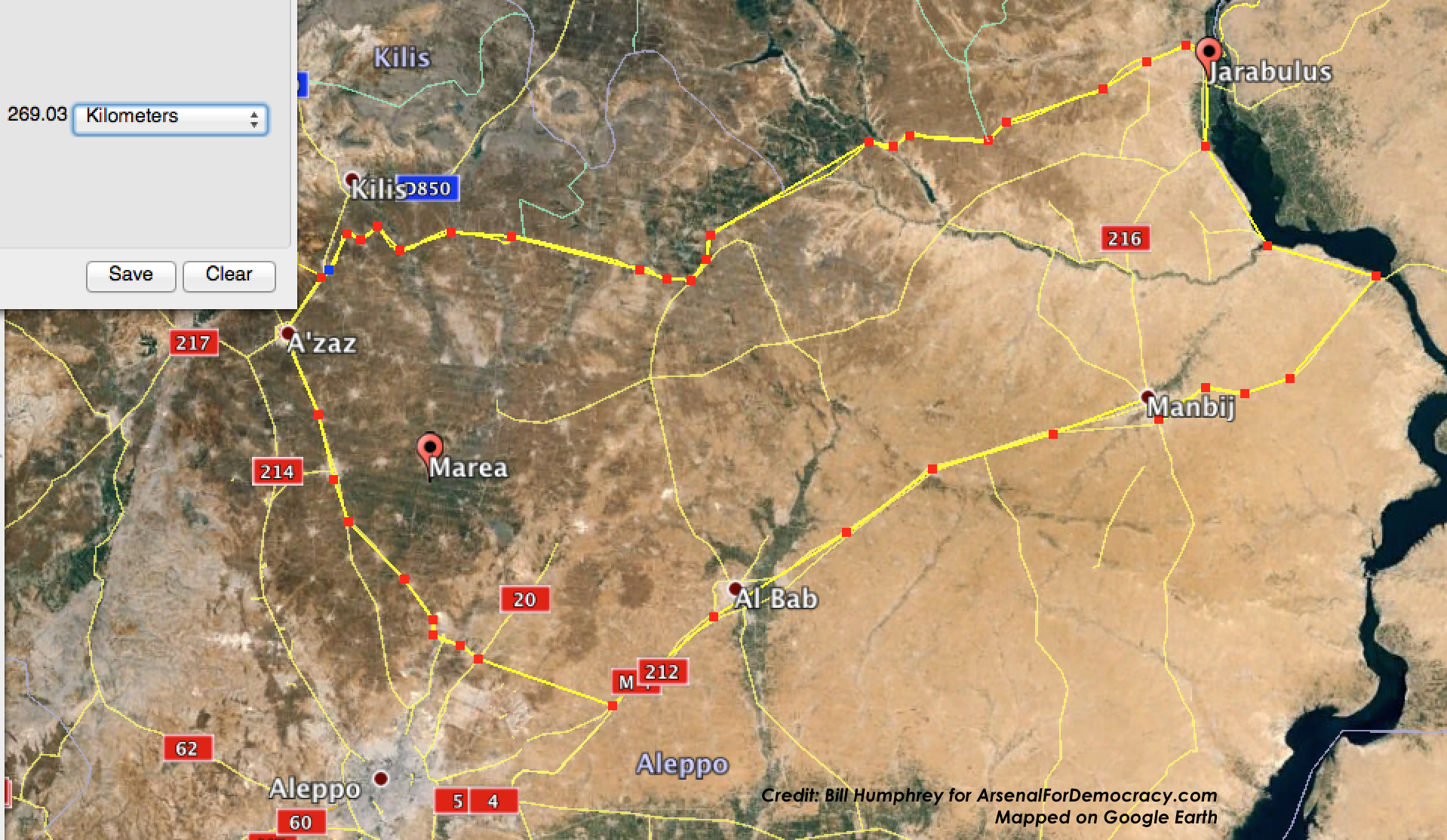 July 24, 2015 projection of the perimeter of a potential Turkish occupation zone and no-fly zone in northern Syria. Click to enlarge.

I seem to have guessed the zone’s width correctly (outskirts of Aleppo to the Euphrates) and the depth may supposedly still be under discussion, but if it includes Manbij and Al-Bab, then I also pretty much will have nailed the depth estimate, because it is likely the whole M4 highway from corner to corner would be the southern perimeter of the zone. However, the Times is merely quoting the same Turkish media reports I was working off of, so we don’t actually know yet. A much narrower “strip” encompassing many fewer “principal population centers” (and outlying villages) could terminate at the highway shown above in the middle of the zone, nearer Marea than Aleppo.