Home » Commentary » Arsenal Essay » A legacy of the Rwandan Genocide

A legacy of the Rwandan Genocide

In April 1994, the presidential plane was hit by a surface-to-air missile of unknown source and the Hutu generals initiated a violent coup within hours and began political purges. Within days, the general massacres of Tutsi civilians were rolling along as the Hutu hardliners had planned for months, and around a dozen Belgian UN troops were killed, prompting Western nations to send in rescue troops to evacuate all their personnel, leaving the ordinary Tutsis (and moderate Hutus) to their fate. Over the course of the next three months, the Rwandan military and an extremist militia committed systematic genocide, killing one person approximately every five minutes on average. (The final victim count was estimated at 800,000 to well over a million. The RPF puts the figure at 937,000).

The Rwandan Patriotic Front, under Kagame, was the only hope for ending the genocide. The rebels still in the north arrived at the capital over the course of the first month and laid siege to it, with the help of a rebel security force inside the city (there as part of the peace agreement). The Rwandan generals were so intent on finishing their genocide that they did little to stop the rebel advances, devoting their resources to killing people nationwide, much as Hitler diverted troops and transportation to massacring Jews across occupied Europe even as his armies were being turned back. The rebels only serious engaged government resistance in June 1994. By early July, it was inevitable that the RPF would defeat the Rwandan military, but even in its final throes it was ordering continued ethnic cleansing. France persuaded the United Nations to let it send UN “peacekeeper” troops to restore the “peace,” though it is obvious they intended to protect the Hutu regime. This caused a brief stalemate after the RPF had ended the genocide campaign, but the French left as soon as the Hutu leadership had escaped to Zaire. The RPF proceeded to seize control of the entire country and a mass exodus of “civilian” Hutus, most of whom had direct involvement in the killings, joined the insane leadership in Zaire. Ironically, after the world had watched and done nothing to halt the genocide, they rushed to aid the refugee camps of the genocidaires.

The Rwandan Patriotic Front became the dominant political party in Rwanda, and within two years they engaged the country in starting the First Congo War to overthrow the pro-Hutu dictatorship in Zaire (now the Democratic Republic of the Congo). Hutu ex-leaders in the camps quickly organized themselves into a new rebel group opposed to the new Tutsi-led government in Rwanda. There was a series of alliance switches throughout the late 1990s and into the early 2000s, and the new Rwandan military made several invasions of the DRC in the extremely brutal bloodbath known as the Second Congo War. Exiled Hutu rebels continue to foment trouble in the Congo to this day. General Paul Kagame is now the president of Rwanda, having assumed the office over ten years ago after the Hutu RPF President Pasteur Bizimungu “resigned.” (The post-genocide solution was for the moderate Hutu Bizimungu to serve as president, representing the majority, with Kagame as VP for the minority.)

Overwhelmingly, there is absolutely no doubt in my mind that the Hutu leadership and their followers and footsoldiers were and remain indescribably terrible people, who bear responsibility for nearly incomprehensible war crimes and crimes against humanity. There is also no doubt in my mind that the genocide would have been far worse had the RPF Tutsi rebels been foiled in their counter-campaign in 1994. They were the liberators. That said, the RPF, both as rebel group and current political party also bear responsibility for the deaths of thousands, if not millions, as well. The scale of guilt tips toward the Hutus, in my view, but this should not excuse all Tutsi crimes of the past… and especially not those that continue to this day.

Rwanda today is an “orderly” country, a “model” for Africa, free of corruption, by foreign accounts, but there is a deep undercurrent of serious problems to observers on the ground:

Under President Paul Kagame, this country, which exploded in ethnic bloodshed 16 years ago, is now one of the safest, cleanest and least corrupt nations on the continent. The capital, Kigali, is not ringed by sprawling slums, and carjackings — a deadly problem in many African cities — are virtually unheard of here. The roads are smoothly paved; there is national health insurance; neighborhoods hold monthly cleanups; the computer network is among the best in the region; and the public fountains are full of water, not weeds. All of this has been accomplished in one of the world’s poorest countries.

But while the nation continues to be praised as a darling of the foreign aid world and something of a central African utopia, it is increasingly intolerant of political dissent, or sometimes even dialogue, and bubbling with bottled-up tensions. Recent grenade attacks in Kigali and a shake-up in the army showed that even one of the cornerstones of the new Rwandan state — personal security — might be in danger.
[…]
With less than four months to go before national elections, few of the major opposition parties have been allowed to register. Some opposition supporters have been attacked inside government offices; others have been jailed. Several prominent government officials who recently broke ranks with Mr. Kagame defected to other African nations, saying they feared for their lives. The BBC local-language radio service was shut down for a time because the Rwandan government did not like the way it was talking about the genocide of 1994.

The government has even allegedly abducted or arrested hundreds of children and adults (without charges or stated reason) and placed them in an island work camp:

Nearly 900 beggars, homeless people and suspected petty thieves, including dozens of children, have recently been rounded up from the nation’s neatly swept streets and sent — without trial or a court appearance — to this little-known outpost. They will spend up to three years here being “rehabilitated,” learning skills like bricklaying, hairdressing and motorcycle maintenance.

According to the article, some of the children’s parents were given no explanation of the disappearances. Once there, they are subjected to quasi-military training and patriotism education, since the RPF has of late been increasingly interpreting all opposition as conspiracy to commit genocide or divide the nation.

I can understand the fear of the Rwandan Tutsis, and I recognize that many average Rwandans and former officials were closely involved in the genocide, but foreign governments should not be coddling the Kagame government. It would be a tragedy if the Tutsi government re-started the alternating cycles of ethnic oppression that have plagued the country since it was first colonized. The stability of the current government has come at very high price for Rwandans and civilians in neighboring countries. Paul Kagame may be a liberator, but he is no saint. Of course, since he has been an American ally since 1990 and has a son in the US military academy, and because he has built relations with China (previously linked with the Hutu dictatorship) it seems likely that he and his party will still receive important backing for years to come. But just as France turned a blind eye to the abuses of the previous government, the new government’s allies should not blind themselves to the problems that exist today. 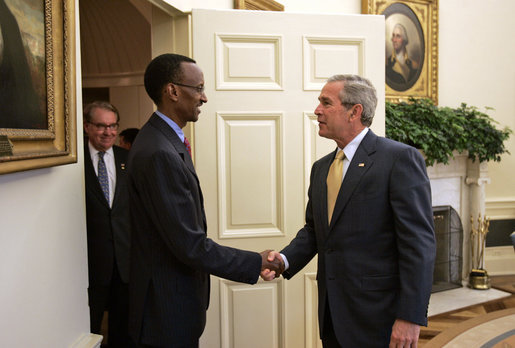 Presidents Kagame and Bush, May 2006