Over the weekend, Kyrgyz troops removed the barricades, which residents had built during four days of ethnic violence that started June 10. At dawn on Monday, security forces began a house-to-house sweep of the area, the Uzbek village of Nariman, demanding information about a Kyrgyz police official who was killed there earlier this month.

Witnesses said the troops kicked men and severely beat them with rifle butts during interrogations. One died of a gunshot wound, another died later of his injuries, and 25 were hospitalized, said Telman A. Badalov, a supervising doctor in the local hospital.

Regional officials at first denied that there were any casualties, but at a news conference later in the day, they acknowledged that two residents had been killed and 23 wounded, saying that troops had opened fire because they faced armed resistance and that their actions were justified. A law enforcement official told the Interfax news service that seven men were arrested on suspicion of being “hired snipers.”

The attacks today, which many eyewitnesses said were unprovoked and unwarranted, confirmed the fears expressed this weekend that there was a heightened risk for Uzbek civilians and that they could not trust either the government or the military. In the initial wave of violence and killings, eyewitnesses saw and recorded troops assisting rioters and attacking civilians, and so the remaining Uzbek civilians in several cities, towns, and villages tried to barricade their neighborhoods against these incursions, which led to the raid this morning.

Meanwhile, the provisional government insisted there was no reason to delay a vote scheduled for this coming Saturday on a new constitution for the country, despite internal and international displacement of as many as 200,000 refugee Uzbek Kyrgyzstanis. (Pictured below is one of the families that fled one Kyrgyzstani city to neighboring Uzbekistan, though most refugees are in camps within the borders.) Uzbeks represent 15% of Kyrgyzstan’s population, but they are mostly concentrated in the South, where the violence has occurred against them in recent weeks. 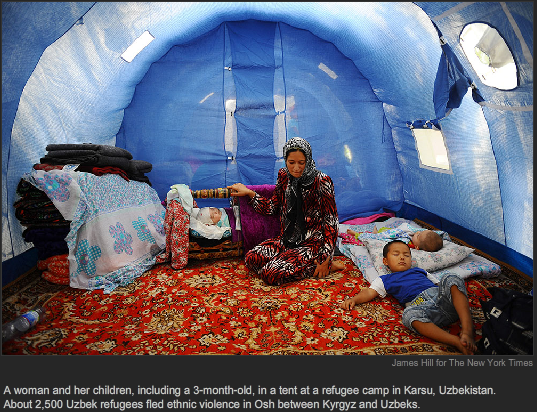