Whenever there’s a severe winter whether event, the conservative cranks start crowing about how this means there’s no such thing as global warming. This view starts from a pretty silly baseline — obviously there will always continue to be outlier events in either direction because that’s what outliers are and weather is not exactly the same as climate — and ignores the other obvious point that winter is typically associated with cooler temperatures than the rest of the year in higher latitudes (nearer the poles than the equator), even if the annual average is rising.

But then there’s just the relatively simple science that explains not only why global warming can exist simultaneously with severe winter weather but how it can cause it to be even more frequent and more severe. This post will explain the basics of two types of events, in the context of global warming.

1. Heavier snow storms
During the course of a year, global warming is evaporating moisture from drier climates. (Right now, for example, we’re seeing record droughts in California instead of winter rainfall to replenish water tables.) During the summer months at each pole, the warming trends are also evaporating meltwater from the ice sheets. This means that, overall, there’s more moisture going into the atmosphere — and it’s going into an atmosphere which is warmer than in the past. The warmer the air (relative to normal temperatures at that time), the more capacity it has to hold moisture.

When the capacity is reached or if the temperature of the air drops suddenly (which reduces capacity), precipitation occurs. In warmer regions or during the non-winter months, this occurs in the form of rainfall. This is why severe rainstorms and flooding have occurred all over the world, even as water shortages are happening right nearby. The moisture is sucked up into the atmosphere on one side of a geographic zone (or not dropped in the first place due to higher carrying capacity) and then dumped out very quickly on the other (usually colder) side, often on opposite sides of a mountain range.

During the winter, in high latitude places, we’re seeing warmer winter months interrupted periodically by very severe snowstorms. During the warm weeks, the atmosphere is collecting a higher than usual amount of moisture. When the temperature finally does dip suddenly, this moisture is released in the form of heavy snowfall (i.e. the much colder version of the heavy rainstorms in the rest of the year). And that’s how we can get an increase of severe snowstorms in some regions during winter, because of (not despite) global warming. 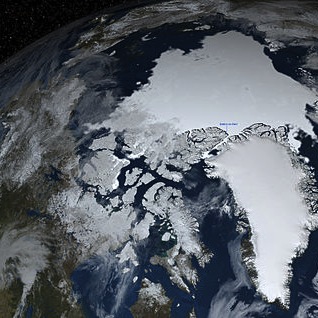 This past week, the continental United States experienced a very deep and widespread freezing, even stretching sub-freezing temperatures as far down the latitudes as the deep American South. The more northern, higher latitudes had (depending on one’s location) windchills ranging from 15-50 degrees (Fahrenheit) below zero. In some places, exposed skin froze within a minute. Very dangerous, very cold weather.

The American media didn’t do a great job explaining how this was happening, in terms of meteorological process, let alone why it was happening (i.e. that it can be linked to global warming). This left the conservatives to snark once again that this was somehow proof that global warming is a myth. But there’s a concise explanation from the blogs of Scientific American.

Essentially, melting Arctic ice in summer, due to global warming, evaporates meltwater into the (warmer than usual) atmosphere. This weakens and disrupts polar wind patterns — known as the polar vortex — that normally “lock” the cold air into the Arctic Circle (or close to it) during winter. Once released, this cold air then pushes southward, way past where it usually is found during these months.

Unfortunately, both of these types events will become more frequent in the near-term due to global warming, as long as there’s still ice to melt up there during the rest of the year and as long as the temperatures are still sometimes getting cold anywhere during the winter.

Individual episodes of these weather events can’t always be tied specifically to global warming. But as a whole, in terms of trendlines, we can correlate them statistically to rising average global temperatures. And by understanding weather science, we can see how there’s also a plausible causal link. So the parallelism of the trends isn’t coincidental. And the near-universal view of the professional climatology community is that global warming is increasing and results directly from human activities such as industrialization of production and agriculture.


Note: This analysis is intended to help lay readers understand the general concepts involved. It is not intended to be a 100% technically rigorous article. Some shortcuts and elisions in the science have been made for ease of mass communication.