Russia’s grip on the Tories (and London) remains strong

Former Labour MP and UK Minister for Europe Denis MacShane has a new article in The Globalist blasting the Conservative Party’s tightening relationship with top Russians, even as the United Kingdom (officially, at least) grows more cold toward Moscow.

In the latest controversy, the Conservative Party is refusing to give back £160k in campaign funds donated by Russian oligarchs and former Putin insiders, just ahead of the downing of Malaysia Airlines Flight 17 in Ukraine (which killed UK citizens), but well after the annexation of Crimea. Last year, the Conservative Party accepted almost £900k in campaign cash from Russian high-rollers. 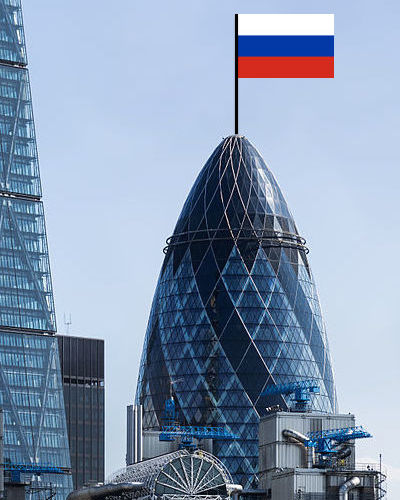 “Russian Gherkin, City of London” by Arsenal for Democracy. Adapted from Colin’s photo on Wikimedia

Even Vladimir Putin mocks London as the place where “the oligarchs have bought Chelsea,” a reference to Roman Abamovich, the owner of the top soccer club. Another oligarch, Evgeny Lebvedev, is the owner of two key newspapers, the Independent, and the respected London Evening Standard, as well as a London TV station.

One in ten of all London homes with a price exceeding $1.5 million was bought by a Russian last year. [Conservative Party donor] Mrs. Chernukin and her husband, Vladimir, a former director of Aeroflot, live in a $12 million dollar apartment.

Another Russian donor to the Conservative Party, Andrei Borodin, has fled to London after accusations of a $370 million fraud in Russia. He lives on a $235 million estate near London and paid $67,000 for a portrait of Margaret Thatcher at a Tory fundraiser last year.

The UK Electoral Commission reports $1.5 million in donations from rich Russians to Conservative funds last year. The UK has given visas to 433 Russians since 2008 who invested more than $1.5 million in Britain.
[…]
London courts are also where Russian oligarchs fight out their legal battles. London lawyers earned an estimated $150 million from just one court fight between Roman Abramovich and Boris Berezovsky. Lawyers say that 60% of all the cases now heard by London senior commercial courts are linked to disputes over spoils from the ex-Soviet Union.

Another attractive legal market is divorce fights. Londoners have gaped at the fierce legal fallout as elderly Russian oligarchs trade in their wives for slimmer, younger beauties.

I was going to note how odd it is that these foreign citizens can make political contributions directly to the parties in the United Kingdom, since that’s prohibited in the United States, but I suppose our equivalent is the heavy presence of “consulting” operations in Washington DC, advising — but not officially representing — a multitude of unsavory foreign clients on their relationships with various malleable forces in the U.S. capital.