The US seems pretty optimistic about Afghanistan’s army

Gen John Campbell, who commands the coalition’s remaining forces in Afghanistan, told 60 Minutes separately he was confident Afghan security forces could prevent the country falling into the hands of militant groups like Islamic State in Syria and Iraq.

“With the military they have here… this is not Iraq,” he said. “I don’t see [IS] coming into Afghanistan like they did into Iraq. The Afghan security forces would not allow that.”

The Afghan military, he argued, was now the “number one respected institution in Afghanistan”.

“Couple years ago, I probably wouldn’t have said that but today it is,” he said, speaking in Kabul.

Critics have in the past questioned the morale and discipline of the Afghan security forces in the face of Taliban attack. At least 4,600 of their members were killed last year.

First off, it’s good to know that our new benchmark for success in training and preparing the new Afghan Army is now whether it’s more or less competent than the Iraqi Army, consistently one of the world’s worst major military forces for the past 25-30 years running. And that glowing U.S. confidence in the ability of the Afghan military to “not allow” an insurgent takeover like in Iraq is not really shared by the Afghan officers themselves:

Brig. Gen. Dr. Mohammad Asif Bromand sits behind a large desk in a hospital at Camp Thunder, an Afghan base in the eastern province of Paktia, listening on a speakerphone to a call for staff from military hospitals across the country. The air is heavy with the tang of cigarette smoke.
[…]
“I don’t know what the politicians think, but as an Afghan general, I think it’s too early to transfer the security responsibility from the U.S. to Afghanistan,” he said. “From each and every aspect, the Afghan army isn’t ready.”

Second, congratulations to America for leaving behind another country where the “number one respected institution” is the military — not the parliament, not the presidency, not the court system, etc. This is a real recipe for future disaster. We probably would have done better, at this point, to have re-installed the monarchy in 2001.

Third, I don’t know about a “couple years ago,” but I do remember almost exactly five years ago when NBC broke the story — from leaked U.S. reports — that the 90,000-strong Afghan Army effectively didn’t exist, despite years and years of training and funding. So did it suddenly shape up and show up just in the last 2 years. Did they finally get sky-high absenteeism and opium usage under control in a bigger army, after they couldn’t do so when the army was a fraction the size?

Supposedly, if one also throws in police and other security, Afghanistan’s total security forces are now 350,000-strong, but even that seems like overly optimistic and manipulative math. According to the Associated Press in October 2014:

The Afghan army has about 195,000 troops mostly financed by the U.S. But Wardak has long argued that Afghanistan doesn’t have enough forces to satisfy the U.S. military’s own counterinsurgency manual. That formula would see between 600,000 and 700,000 troops.

Including police and other security units, Afghanistan has about 350,000 Western-funded security forces.

And besides the “ghost army” problem of chronic absenteeism that has plagued the Afghan National Army, much like the Iraqi Army, there’s another pretty huge problem reported by the AP:

All that Western money has led to a clearly improved military, said a former army general, Jawed Kohistani. But Kohistani also pointed out why the West might be hesitant: Taliban fighters join the army as new recruits, undergo training, get issued new weapons and then defect back to their insurgent force.

As a reminder, we in the United States are spending an estimated $3.6 billion per year to achieve this little, possibly even actively harmful, result. With no viable domestic funding source of a comparable amount, this is expected to continue until at least 2024 (nearly a decade from now!) if not indefinitely beyond that. 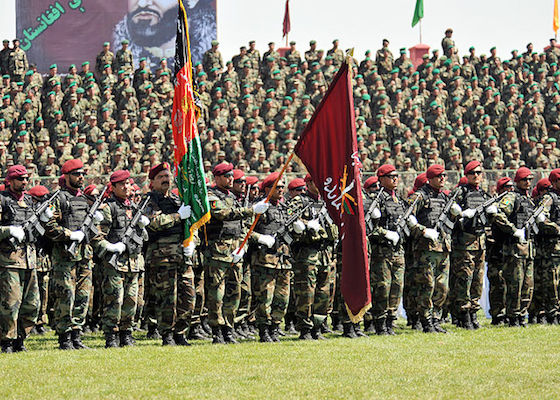 Soldiers of the Afghan National Army during a ceremony, April 2010. (US Air Force Photo)

Also don’t forget the huge friendly-fire problem of Afghan troops accidentally or intentionally killing their foreign partners, trainers, and supervisors. That came to a head this past August:

For the first time since Vietnam, a United States Army general was killed in an overseas conflict on Tuesday when an Afghan soldier opened fire on senior American officers at a military training academy.

The slain officer, Maj. Gen. Harold J. Greene, was the highest-ranking member of the NATO-led coalition killed in the Afghanistan war […]

He was one of the most senior officers overseeing the transition from a war led and fought by foreign troops to one conducted by Afghan forces. His specialty was logistics — he was a longtime acquisitions officer — and he was dispatched to Afghanistan to help the Afghan military address one of its most potentially debilitating weaknesses: inability to manage soldiers and weaponry.

[…] A German brigadier general and a senior Afghan commander also were among the wounded, Afghan and coalition officials said…﻿

None of the points I’ve raised above are, in my mind, an argument for staying. It’s just further evidence that this has been a complete catastrophe almost from the start, and that we should have left five years ago when it was just about as bad but with five years less money and five years fewer lives lost.