Highlights from The Economist’s excellent article on why these days the United States can afford to (and should) drop Saudi Arabia as a major ally, to stop undermining all of U.S. foreign policy:

1. Oil: “Oil is fungible: lousy relations with Russia, the second-biggest producer, do not threaten America’s economy. […] America’s shale technology has put a ceiling on the oil price, and its economy is less oil-intensive than three decades ago.”

2. Counterterrorism: “Intelligence co-operation may be valuable, but its main task is tracking threats that have been subsidised by the Saudis themselves.”

3. Stability: “If the regime is as secure as it seems, however, why should America abandon its basic values in the name of keeping it in place?”

4. Arms Sales: “Strip these things away and what’s left is the arms sales. These at least have the virtue of being nakedly self-interested. […] yet America need not be so eager to put principle aside when dealing with its old ally” [merely to sell arms to Saudi Arabia].

Read the full article for explication/justification of each of these quotations. 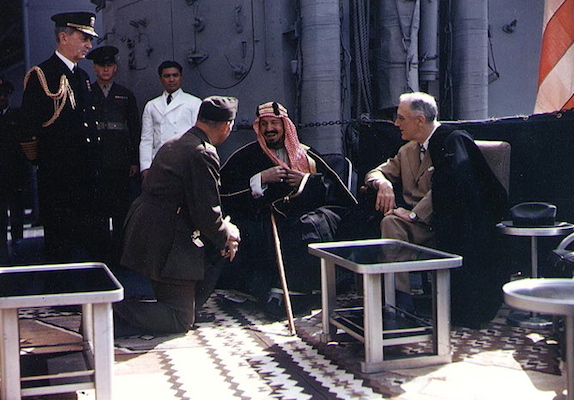 Pictured: FDR meeting with King Ibn Saud, of Saudi Arabia, on board USS Quincy in Egypt, on 14 February 1945.