An age-old struggle that isn’t age-old

In Washington conventional wisdom these days, the Middle East has been an endless sectarian struggle between Sunnis and Shiites since the split of 632 CE.

In the Middle East’s actual reality, there were 13 centuries where that wasn’t actually true. There was plenty of fighting, just as there was pretty much everywhere else at the time, but that wasn’t the motivating factor.

Perhaps the biggest problem with this historical narrative is that it ignores everything that happened between 680 and, say, 1980. Op-eds about the “ancient” and “age-old” Sunni-Shiite warfare rarely reference this crucial 13-century period — a.k.a. the entire time during which Sunnis and Shiites were supposedly in conflict. Like everywhere in the world, people in the region were definitely fighting during this time. Historians could even provide a couple good examples of battles along Sunni-Shiite lines. But sectarian identity was seldom the chief issue that brought people in the Middle East to war.﻿

The full piece is excellent and provides lots of citations in the links, some of which were also very cool to read. Danforth also offers some thoughts on how certain factions today are exploiting the perception of a timeless sectarian split to ensure everyone rallies to one side or the other out of self-preservation against the other side. 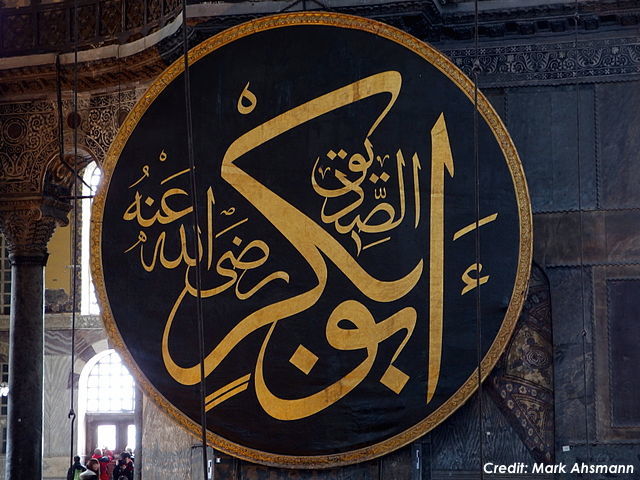 Calligraphy in Istanbul of the name of Abu Bakr, the Caliph whose selection first divided the Sunni and Shia followers of Islam. (Credit: Mark Ahsmann)