Op-Ed | The Future of Living Wages 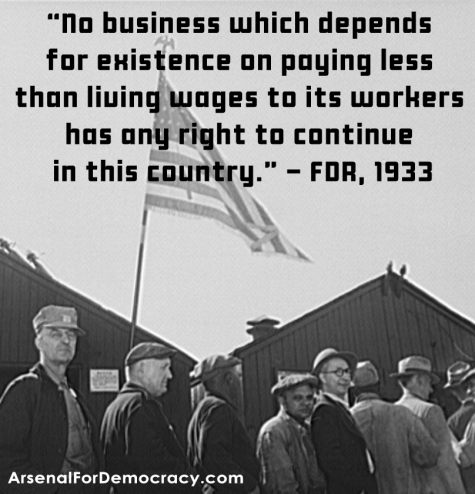 And this time, the pressure will affect (and is already starting to affect) workers with higher incomes, too.

It is as if President Roosevelt foresaw all of this. As he put it in his 1933 speech on the necessity for minimum wage mandates: “By workers, I mean all workers, the white collar class as well as the men in overalls.”

While the latter have often been politically weak, the voters of the “white collar class” tend to be the primary field of competition for most major political parties in advanced democracies.

With their jobs and wages increasingly at risk, too, the problem will be much harder for governments to ignore.

If (and since) corporations are unlikely to do their part in a footloose global labor market, governments may have no other choice but to come up with the money and systems to subsidize employment and/or incomes (regardless of employment status).

Job creation subsidies in the U.S. have become widespread. Already, Germany has expanded subsidies for employers during downturns to maintain staffing levels at reduced hours but normal pay. Some U.S. states are testing similar ideas.

For more reading, explore:
Thomas Paine’s Dividend: An Idea Whose Time Has Come

A Globalist Paper by Brent Ranalli

Bolder strategies may become necessary simply to keep people occupied, fed and housed. That might even mean providing minimum income supports to freelancers and artisans, as well as various other strategies that seem inconceivable to many now.

The issue is by no means a “first-world problem.” Globalized interconnectedness and technological advances have already delivered many workforce challenges from the older advanced economies to newly-industrialized countries.

These economies are facing this well before they have even settled into their new, middle-income or threshold high-income statuses.

From Latin America to Asia, governments are confronted with a simple reality. Mega-corporations simply move (or automate) production when wages are set above their preferred level.

Recently, during a tense farm labor dispute, Mexican federal government even briefly considered paying the difference between a minimum and living wage. Ultimately, this unprecedented proposal was abandoned.

Still, similar ideas are bound to resurface elsewhere, as wages and employment figures reach a crisis even outside of recessions. New approaches to the realities of the 21st century economy are now inevitable.

Funding them fairly will be a hurdle too, of course. Tax avoidance among high-earners, like offshoring, is another costly jurisdictional hopscotch game plaguing globalization today.