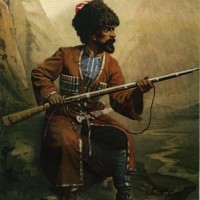 In addition to the much more contemporary mass slaughter of ethnic Chechens by the Russian Federation (and earlier waves of deadly internal deportations by the Soviet Union), there’s the simple, horrifying reality that the Sochi Olympics are being held pretty much at ground zero of a 19th century genocide/mass expulsion.
Read more

I was a huge fan of the Olympics when I was growing up, probably ever since I had to do a book report on Jesse Owens when I was in elementary school. I knew about the problems in the past — and have had an emerging appreciation for the difficulties and tribulations it causes the residents of host cities, particularly the lower-income folks. But, broadly speaking, I believed it was one of those things that had an important ideal for humanity even if it didn’t always meet it.

When I say I was a huge fan, I mean huge. In fact, from February 2002 (i.e. Salt Lake) to some time around February 2006 — maybe later even — my bedroom was always decorated with Olympics-related stuff. As a kid, I knew an insane amount arcane trivia about various Olympics, and I’m not even really big into sports. I even had an Olympics-themed birthday party one year. I’ve stayed up late so many summers and winters, night after night, to watch the games. I was very disappointed not to have a TV in 2010 for the Vancouver Games and kept trying to find TVs playing it in public spaces. In 2012, despite all the annoying tape-delay BS, I was relieved I had a TV to watch the London games.

This year, I would have all the time in the world and my own TV. But I won’t be watching any of the 2014 Sochi Winter Games. Not after everything that’s happened in the run-up to it.
Read more