Since June, the Unist’ot’en clan has prevented work crews from accessing traditional territories that oil companies see as key to Canada’s future

My quick summary of the story: Indigenous Canadians from the Unist’ot’en clan are physically re-occupying land, stolen from them over a century ago, to prevent environmentally destructive energy development by the Harper government and oil companies.

No wonder Prime Minister Harper reacted so angrily last year when the United Nations reminded him he is bound to receive “Free, prior and informed consent” from First Nations peoples when Canadian federal policies affect them and their sovereign nations. Free, prior, and informed consent tends to stop things like pipelines.

Best quote: “This is Unist’ot’en territory. It’s not Canada. It’s not B.C.”

Not everyone in the Nation, of course, is happy with the resistance. Some chiefs seemed more supportive of the oil companies than of the efforts to block the pipeline, claiming it would be economically beneficial to their Nation. 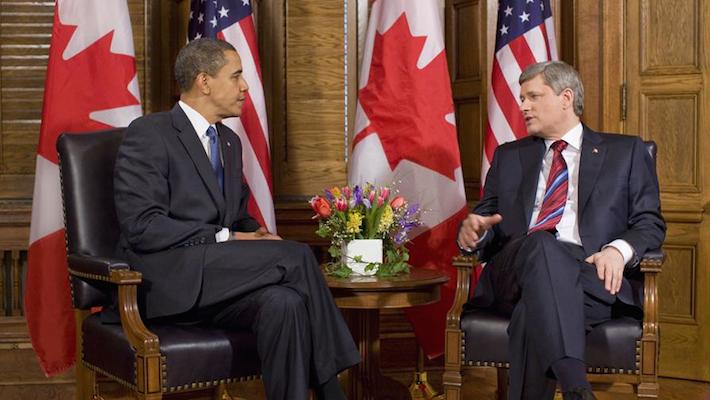 The Economist ran an article on the slighting of Canada’s flag’s 50th anniversary by the current Conservative government — which is otherwise quite gung-ho about promoting (even creating) Canadian nationalism. The five-decade-old flag replaced British imperial/monarchical motifs.

For non-Canadians, the passive-aggressive bickering over Canadian nationalism, history, and symbols is fairly amusing. Excerpt from the piece:

Mr Harper’s government has been reinforcing ties with Britain. He reinstated the word “royal” for the navy and the air force, replaced Canadian artwork in the lobby of the foreign ministry with a portrait of the queen and agreed to share some embassies with Britain. Given his royalist inclinations, it would be tough for the prime minister to celebrate the flag whole-heartedly.

The Liberal Party, which supported the flag’s development and introduction in 1965, recently cobbled together an enthusiastic rally to celebrate the flag (and itself ahead of upcoming elections). The Conservatives stayed pretty quiet about the anniversary.

Canada’s Conservative government did not seem thrilled about the results of a recent UN World Conference on Indigenous Peoples. They didn’t exactly shout their displeasure from the rooftops, but it got dug up pretty quickly all the same. According to the Manitoba-based APTN [Aboriginal Peoples Television Network] National News report, headlined “Ottawa buries official statement criticizing UN conference for giving Indigenous people too much power”, here is what the government said:

“Free, prior and informed consent…could be interpreted as providing a veto to Aboriginal groups and in that regard, cannot be reconciled with Canadian law, as it exists,” said Canada’s official statement. “Agreeing…would commit Canada to work to integrate (free, prior and informed consent) in its processes with respect to implementing legislative or administrative measures affecting Aboriginal peoples. This would run counter to Canada’s constitution, and if implemented, would risk fettering Parliamentary supremacy.”

The statement also reiterated Canada’s position that the UN declaration on Indigenous rights was merely an “aspiration document” that had no force in Canada.﻿

I realize that, as U.S. person, I’m not up on all the nuances of Canadian federalism — though I do try — but to me it seems pretty straightforward: This is not a run-of-the-mill pressure group or provincial/territorial government trying to block things from parliament; rather, this is about obtaining consent for major governmental policy actions that will directly affect the First Nations, Inuit, or Métis peoples who have gotten the short end of the stick for the vast majority of Canadian history in the past two-hundred fifty plus years. Moreover, this trend has rebounded under the Harper government, according to Matthew Coon Come, Grand Chief of the Grand Council of the Crees (in Eeyou Istchee)﻿, in his reaction to the above statement on the Conference:

For years, the Harper government has refused to consult indigenous rights-holders on crucial issues, especially when it involves international forums. This repeated failure to consult violates Canada’s duty under Canadian constitutional and international law.

It would seem to me that special consideration and consultation — even tantamount to a “veto” option — should be given out of fairness, to ensure that a marginalized and self-governing population doesn’t get steamrolled by government decision-making every time. Failure to do so seems way more “counter to Canada’s constitution” (or the spirit of it anyway).

Plus, as I understood it, the organized indigenous nations are theoretically — much as in the United States — sovereign entities within but apart from the surrounding country, which have treaty with the federal government of Canada (or the provincial/territorial governments). That should, by definition, give them a veto anyway. At the point where you are making treaties with another entity, that entity has pretty much been de facto recognized as having the legitimate ability to object to the terms or execution. If that weren’t the case, then there would be no authority to make the treaty in the first place, and then it would be an illegitimate, coercive treaty made under duress.

Feel free to correct me if I’m missing some core constitutional element here, but it seems like a matter of human decency regardless.