Home » Arsenal Research » Watching the USSR break up, from Space

Watching the USSR break up, from Space 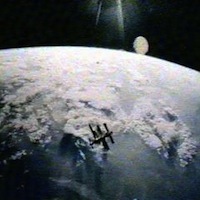 It must have been totally insane experiencing your home country’s collapse and dissolution from space.

Apparently, the ground communications team in the USSR wasn’t sure how to handle the August 1991 coup attempt against Gorbachev, so they just started alternating broadcasts to the space station from pro-coup Soviet TV and anti-coup Russian nationalist TV to keep the cosmonauts apprised no matter how it turned out.

During the EO-9 mission, more big chunks of the USSR began breaking off to the point that when the next crew arrived to relieve them, none of the cosmonauts were Soviets and the mission was launched from outside the USSR (in Kazakhstan). When a January 1992 supply rocket arrived, the ground team had gone on strike due to Russia’s emerging fiscal crisis, and the supply mission had to get themselves docked without help from flight controllers.

At the end of the EO-10 mission there wasn’t a Soviet Union anymore and everyone returned to Earth under their respective nationalities, including one member who had arrived on EO-9 as a Soviet and returned after a double mission as a Russian. Russia had to pay a bunch of cash to Kazakh authorities to rent recovery equipment and teams to go pick up their returning crew, most of whom weren’t even Russians.