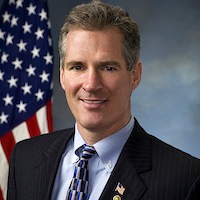 Last seen as an incumbent losing a general election by 8 points in the next state over (Massachusetts), Scott Brown is not only will-he-won’t-he shadow campaigning for Senate in New Hampshire but is already playing the ever-absurd “not-ruling-out-running-for-president” game. That has even involved going to Iowa to find out, as he put it to the local papers, “whether there’s an interest in my brand of leadership and Republicanism.” Ridiculous cart before the ridiculous horse.

“Scott Brown has always been in love with himself, and this is just a vanity tour,” said Matt Canter, deputy executive director of the Democratic Senatorial Campaign Committee.

I wish he would just go away quietly for a while. I’m honestly surprised the New Hampshire Republicans are even entertaining, perhaps even welcoming, such blatant carpetbagging.