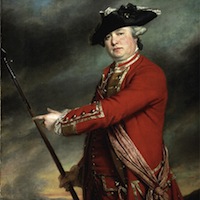 A state legislator to the north of former Senator Brown’s former state believes that Scott Brown is tyranny incarnate and that a second American Revolution may be necessary to halt his evil, semi-moderate ways (i.e. his support for an assault-weapons ban).

Or at least a lot of standing around shouting about Scott Brown, while waving guns and ammunition, may be necessary. Followed by an armed insurrection against the dictatorship that is a social policy agenda fifty plus years behind every other advanced economy.

There’s always an awful lot of chatter from the nutters about the need for arming one’s self against tyranny, with dark references to the early days of the American Revolution. The implication is usually that “some” (unnamed or named) people in this country have “forgotten” how we started.

It’s probably worth noting that the instigating incident of the Battles of Lexington and Concord — the former depicted in the frieze at the top of this blog — when the British went to try to seize a colonial militia armory pre-emptively, happened in Massachusetts.

As a native, I can assure the rest of the country that we definitely haven’t forgotten about any of the early events leading to the Revolution. Massachusetts took a lot of the brunt of the British response before and during the American Revolution. Things like the third amendment are mostly about how we really don’t want British troops living for free in our houses in Boston. The American Revolution is a big part of Massachusetts history classes from grade school through high school, and the historical sites are literally all around us.

I think we Bay Staters have a pretty solid handle on what the American Revolution was and what unreasonable government oppression looks like. Nevertheless, Massachusetts folks by and large seem pretty happy with the progressive agenda they’ve been voting their representation into office to enact. If it were tyranny — or even mildly inconvenient, as in the case of tea taxes passed without legislative representation — we would have noticed by now.

And Scott Brown may have been kind of a mediocre-to-mildly-bad U.S. Senator, particularly in that he was a poor fit for Massachusetts, but he’s not a tyrant. Should he manage to carpetbag into New Hampshire and get elected there — by the will of that state’s people — he also wouldn’t be a tyrant by any rational definition.

So cool your jets, Mr. Live Free or Die. I’m confident the horsemen of the totalitarian apocalypse don’t wear brown jackets and drive pickup trucks up and down I-93.