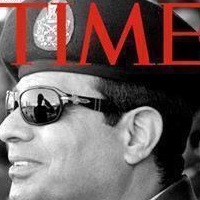 In the least convincing denial yet that he is building a cult of personality and permanent personal dictatorship, Egypt’s General Abdul-Fattah el-Sisi has told voters there that they should vote for his new constitution in this week’s referendum if they want him to run for president:

“If I run, then it must be at the request of the people and with a mandate from my army,” General Sisi said at a military seminar, according to the website of the state newspaper, Al Ahram. “I can’t turn my back on Egypt.”

Sisi added that it would be embarrassing for him if they didn’t vote for it, and you don’t want to disappoint the Dear Father.

“Don’t embarrass me in front of the world,” he said, “not me personally but the military, because in the military we are as united as one man’s heart, and we adhere to democracy.” He noted that the new charter authorizes the military to “protect the will of the people” and he vowed, “We will protect it in any circumstances.”

Fortunately for Sisi, campaigning against the proposed constitution is not allowed. Seems like a pretty fair way to check on public opinion before you run for something, right? And just to be sure, the state propaganda engines are grinding away toward victory:

The state news media and Egyptian private television networks, all supportive of the military takeover, are effusive in their endorsements of the new charter and contain scarcely a word of criticism. A group of Egyptian movie stars has recorded a television commercial singing a song in praise of the new charter, ending with a call for a thousand yeses to the new Constitution. And the military itself has produced a television advertisement in which a group of children sing their own endorsement to a martial theme.

“It’s to be or not to be,” the children sing, warning listeners that they will be judged by God for their vote and urging them not to “leave my country for destruction.”

So, to recap: If you vote against this, you’ll embarrass the national armed forces and its leader and then God will smite you. This seems compelling.