American History: A bloody coup in the U.S. 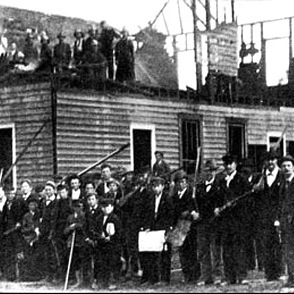 One of the reasons we have a month set aside to celebrate and remember Black History is because unfortunately the teaching of American History tends to leave it out the rest of the time (which is also why there’s never been a need for a White History Month). However, just because it isn’t taught doesn’t mean it’s unimportant or that it doesn’t count. Here’s one historical event I want to talk about today because — sad to say — I only just recently learned of it myself.

Did you know there was once a bloody coup d’état within the borders of continental United States?

In November 1898, White supremacists plotted the overthrow of the elected government of Wilmington, North Carolina — the state’s largest city at the time — because it was mostly composed of Black representation and pro-Reconstruction Whites, a development they had failed to prevent despite years of trying to roll back Black voting rights and weeks of intimidation campaigns leading up to the election.

This event is commonly known as the “Wilmington Insurrection,” a name which is a bit opaque-to-overly-polite and belies the magnitude of what happened: A legitimate, elected government was ejected from power by force and many people were killed. A mob of 1,500 White men torched the headquarters of the city’s Black newspaper — see the photo, from the NC Office of Archives & History, to the above left — and both local troops and Federal service members massacred approximately 90 Black citizens.

What was their objection to the elected government? At the time, the city was actually majority-Black, and so having Black representation in the local government would make sense ideally. But White supremacists are definitely committed, if nothing else, to the false idea that whites are and should be superior in every way, including in the power structure. The bloody coup d’état succeeded — resignations of all sitting members, regardless of race, were obtained along with the physical exiles of at least some of them — and it resulted in such high emigration by Black citizens that the city flipped from majority-minority to majority-White.

The U.S. government didn’t intervene — even after their own Navy Reserves men killed civilians and the conspirators had installed themselves as a new government — because it was right as the country was hitting its post-Spanish-American War level of rah-rah North-South unity hype, three decades after the Civil War had come to an end. The coup’s unchallenged success emboldened the state’s White supremacist legislators to start passing Jim Crow laws for the whole state. The new city government then secured its power indefinitely in the 1900 elections by explicitly ordering its followers to shoot any Black voter at the polls if he did not turn back after a single warning.

The event was one of many key moments in the late 19th century that ensured that many Black Americans would remain politically (and thus economically) under-powered in their own destinies until a century after the Civil War, which is just a half century ago. Meanwhile, the White supremacists were able to continue to use their power to amass further wealth, a skewed distribution structure that remains in effect even today by force of time, benefiting their descendants, even if the current generation doesn’t share those views.

The U.S. and its citizens have, of course, been involved in or linked to many coups, particularly in its overseas territories, including most notably the Kingdom of Hawaii. But those places weren’t in U.S. states with democratically elected governments. So far, this event is the only recognized coup in the U.S. proper, and “recognized” is even a bit of a stretch, given that it’s been called a “race riot” or “insurrection” for so long. But it’s definitely nothing short of a coup — well outside the context of a war — which makes it particularly significant to American history. For that reason, I thought it would be worth sharing today.


Suggested reading: How The Only Coup D’Etat In U.S. History Unfolded and Wilmington Insurrection of 1898