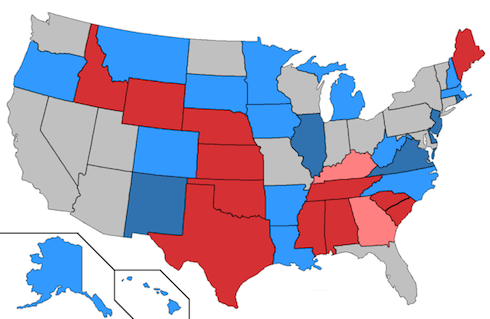 Other examples we’ve seen this year like Virginia Republicans getting behind Ed Gillespie won’t prove much of anything since the Democrats will still win handily there. So I think it’s still too early to be writing trend pieces on this idea.

In fact, it’s possible to build a case in the other direction (for the sake of argument). The Georgia Senate race features a Republican primary brawl between tea partiers, while Dems have rallied around Sam Nunn’s daughter for the seat — making it one of the better Democratic pushes in the state in recent years. Meanwhile, Kentucky is looking like a potential battleground with Republican disarray and largely unified Democrats. If I recall correctly, Montana’s also cohered around the appointed Dem incumbent whereas Republicans are still figuring their side out. States like New Hampshire, which could have been endangered for Dems, seem to be firming up. The list in that column is getting pretty long.

Yes, it’s true that Democratic-held seats in West Virginia, North Carolina, Arkansas, and Louisiana look good for Republicans (and may prove the new unity/establishment ascendant theory) but they were already bad. (And hey — anything can happen between now and November; some of these golden nominees may prove less shiny by then.)

It’s true, too, that losses in those four states would (edit: might, since majority is currently 55) cost Democrats the Senate, since there are only about 2 possible pickup opportunities (KY and GA, as noted above), so there may be something to this theory. But those losses will still have a lot more to do with the map and the overwhelming math against the Democrats this year than about whether or not Republicans have their acts together. Sometimes in some races, you’re just going to lose no matter what, even if they nominate an inanimate object.

I am, however, worried that today’s development in Colorado probably means Ken Buck will soon be a member of Congress. That seat is super conservative and super Republican. So is he.