GOP working hard to make sure Dems fully united in 2016

Screen capped this from the top of Google News yesterday. It’s a pretty good summary of where the Republican top brass is right now: 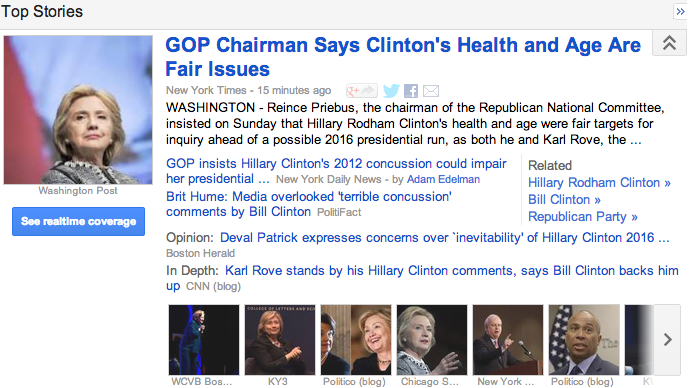 From the people who brought you an ancient, walking future health emergency with anger management issues as their nominee six years ago comes… rampant, idle, and sexist speculation based on nothing!

At the rate they’re going with these absurd attacks, even the Anti-Hillary Democrats will be willing to walk through a field of land mines to get to the voting booth to elect her in November 2016.﻿

Bill Humphrey is the primary host of WVUD's Arsenal For Democracy talk radio show and a local elected official. Follow him @BillHumphreyMA on twitter.
View all posts by Bill Humphrey →
Tagged  2016 US elections, Democrats, Hillary Clinton, Republicans.
Bookmark the permalink.