Home » Commentary » Arsenal Analysis » Who are the Yazidis at Mount Sinjar right now?

Who are the Yazidis at Mount Sinjar right now?

Yesterday, U.S. and Turkish relief military operations began to try to help tens of thousands of displaced Yazidi Iraqi civilians who have been surrounded without food or water at Mount Sinjar, a Yazidi holy site, by ISIS forces.

These civilians belong to a long-suffering minority religious sect based in Iraq, and their latest oppressors at ISIS have shown themselves to be deeply inflexible toward even their own fellow Sunni Muslim Arabs. The Yazidi adherents are a predominantly Kurdish-speaking people but are very close-knit and inward-looking, like many of the very small Middle Eastern minority religious groups, most of which also prohibit marriage outside the faith on pain of death.

For global perspective, the Yazidi population has faced over 70 different concerted attempts in history to exterminate their entire population. This is done on the grounds they are “devil worshipers,” in an apparent misinterpretation of their monotheistic fusion doctrine that merges elements of Islam, Zoroastrianism, Mithraism, and a range of other Mesopotamian, classical, and pre-modern Middle Eastern faiths from the northern Iraq and western Iran areas. The primary point of contention is that they believe God’s most favored archangel (Azazel/Lucifer) did not fall from grace (to become Shaitan/Satan) and should be revered for refusing to bend to mankind on the orders of God, because he was actually complying with earlier orders from God not to bow to anyone, and God made him the leader of the archangels as a reward for remembering that.

The Yazidis are now a relatively small sect worldwide (no more than 700,000 and possibly less than 250,000). There are 40,000-50,000 members trapped on the mountain right now. It’s difficult to keep track of their current numbers after more than a decade of nationwide unrest in Iraq, but that figure may amount to more than half the remaining homeland/Iraqi population of Yazidi followers.

In 2007, New York Times reported at the time, terrorists detonated four bombs that were so big they flattened two entire towns full of Yazidis. The eventual death toll was estimated at just under 800, making it the second worst terrorist attack in modern world history — and one that further shrank an already endangered community. 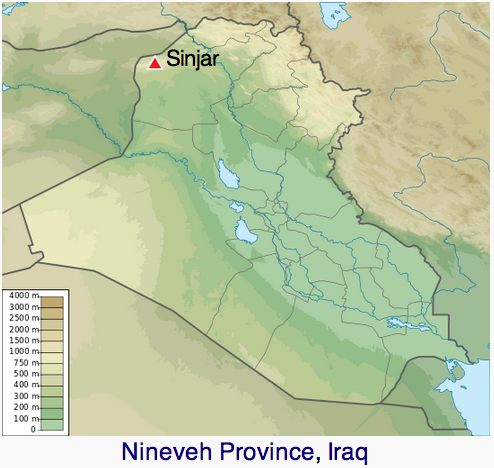