Priceless undiscovered antiquities in the ancient Assyrian city of Nimrud, 20 miles south of Mosul (and ancient Nineveh), were lost forever in recent days as ISIS continued its purge of pre-Islamic history in Mesopotamia by packing dig sites with explosives and blasting them into oblivion.

Flashpoint Intelligence, a global security firm and NBC News consultant, could not confirm that the site being destroyed in the video is in fact Nimrud, but it said “online chatter does seem to corroborate the claims, and the rest of the video does follow the group’s pattern of destroying ‘idols,’ as they call it.” 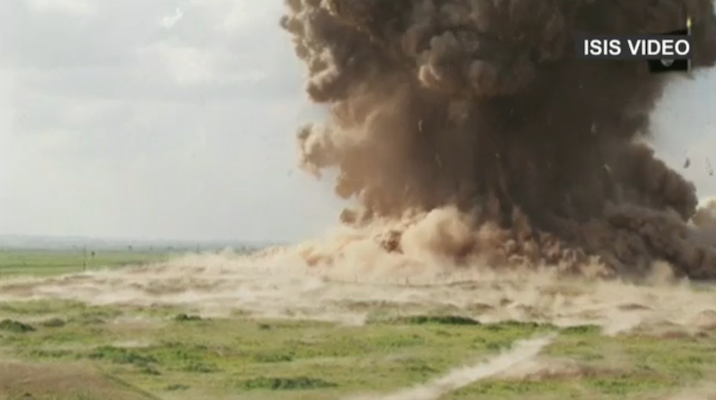 The city was built more than 3,000 years ago in the Middle Assyrian Empire and eventually became the capital of the later Neo-Assyrian Empire, under King Ashurnasirpal II, a brutal conqueror who shocked much of the surrounding region but also loved art promoting his success.

Last month, the terrorist organization destroyed exposed/above-ground excavation sites (some opened in the mid-19th century) with bulldozers and released footage showing fighters smashing ancient statues — including the world-famous lamassu winged bull-men — and wall reliefs from the city that is mentioned in the Book of Genesis.

Even some early Islamic sites have been devastated or erased by ISIS attacks including the Tomb of the Prophet Jonah in Mosul last July.