Five Thai students who flashed a salute inspired by Hollywood film series The Hunger Games at Prime Minister Prayuth Chan-Ocha have been detained.
[…]
Gen Prayuth led the coup, which came after months of political deadlock and unrest, and became PM in August.

On Wednesday, he was speaking at an event in the north-eastern province of Khon Kaen when five students from a local university sitting near the podium stood up. They removed their shirts to reveal T-shirts underneath with a Thai slogan reading “No Coup”, and flashed the three-fingered salute.

Police officers and soldiers immediately took the five away. […] Army officials later confirmed that the students were taken to a military camp and were detained for “attitude adjustment”, reported The Nation.

“Catching Fire,” the second movie in the franchise and perhaps the one most prominently featuring the salute, was released in November 2013 in Thailand, and became the country’s eighth highest grossing movie of last year. The first movie, released in March 2012, was in the top 20 that year.

This protest occurs just in time for tomorrow’s release in Thailand of the third movie in the series — “Mockingjay,” Part 1 — which is likely to trigger a fresh resurgence of the salute. 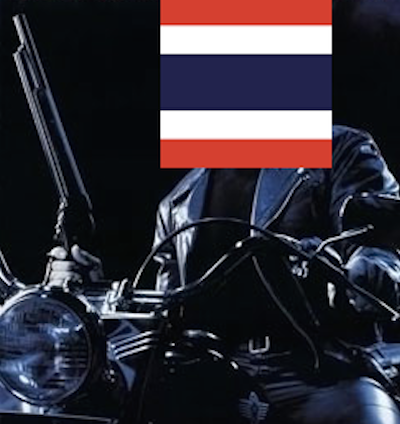 I kept expecting to find articles saying this was just a rumor but every source seems to be confirming: The pro-democracy Red Shirt protesters opposing the recent Yellow-aligned military coup in Thailand have officially adopted the defiant anti-authoritarian salute from the Hunger Games books and movies.

“Catching Fire,” the second movie in the franchise and perhaps the one most prominently featuring the salute, was released in November 2013 in Thailand, and became the country’s eighth highest grossing movie of last year. The first movie, released in March 2012, was in the top 20 that year.

The new military government and police forces have announced that the salute will be banned along with the already prohibited political gatherings of more than five people at a time.
Read more

Thailand has so many military coups that the Wikipedia entry for each one should have a “Next” and “Previous” button like on pages for national elections.

This coup was so poorly thought out that the Royal Thai Army instinctively suspended all but one article of the 2007 constitution, which was written by…drumroll please…the Royal Thai Army after the 2006 coup. You’d think if these coups solved anything they wouldn’t be needing another one so soon against their own constitution.

Of course, that assumes that the coup is a means to an end rather than an end itself. And judging by what we’ve heard from the opposition protesters for six months, it’s probably more a goal than a tool, to them. Unlike many mass protests around the world, it’s not that they want more democratic opportunities, it’s that they don’t want democracy at all. In that light, a coup is the destination itself, not the path to get there.

So much for insisting earlier this week that they were just imposing martial law and not overthrowing the government. It’s officially now a coup:

Thailand’s military has announced it is taking control of the government and has suspended the constitution.

The cabinet has been told to report to the military, TV broadcasting is suspended and political gatherings are banned. A nationwide curfew will operate from 22:00 to 05:00 local time.
[…]
On Tuesday the army imposed martial law. Talks were then held between the main political factions, but the army announced the coup on Thursday.

Political party leaders, including opposition leader Suthep Thaugsuban, were taken away from the talks venue after troops sealed off the area.

Foreign media are reporting very rapid consolidation of power and the army focusing on breaking up protest camps in support of the government, even though the opposition protesters have been obstructing everything for six months.

The military is traditionally aligned with the faction currently in the opposition and last overthrew the ruling coalition during the 2006 coup. By some reckonings, this makes military coup number 19 since absolute monarchy ended in 1932.

The military leadership claims the coup was a necessary step because the elected government did not want to step down as part of crisis talks. All the political representatives were detained and carried off to barracks when talks failed to make progress, before the coup was announced.

After six months of anti-democracy protesters trying to prevent elections, Thailand’s military has stepped in — but insists they are just preventing chaos, not overthrowing the government.

So: Where is the Thai military is going with their martial law announcement? They’re repeatedly saying (in domestic and Western media) that it’s not a coup, they’re declining to remove the leadership (for the moment), and they’re telling the opposition protesters to leave the streets.

But they could be telling them to leave because they got the coup they wanted. And they could be keeping the civilian leadership in place because they don’t need to remove them if they control everything anyway — especially since the elected prime minister has already been removed by the courts. And is martial law without civilian authorization a coup by definition?

Moreover, the military has seized power, according to the BBC, “at least” 11 times since 1932, which implies there have been a lot of these halfway coups. (The last official coup was in 2006 against the again-now ruling coalition.)

Meanwhile, the Bangkok Post says there have been 18 coups in eight decades, though they didn’t elaborate on how they counted. Even their experts seem a bit mystified as to what exactly is happening.﻿

We’ll probably see more developments shake out in the coming hours and days that clarify what the plan is. But I’m not counting on the opposition protesters to leave the streets even with a partially friendly military also in the streets, because their goal is the indefinite suspension of democracy.

They probably won’t leave the streets unless the military either a) goes all the way and clearly takes power itself or b) is actually willing to fire on their own biggest civilian supporters and lose mass approval.


Update at 10:40 AM ET: A slight clarification on Tuesday from the military leadership — re-emphasizing that government workers should continue normally, that they want a political solution to be negotiated among the politicians, that there is no curfew, and that martial law will continue indefinitely until no longer needed (however that is determined). However, they also took control of television stations, shut down several satellite broadcasts on both sides of the political fracas, and restricted entry into the capital. The military also cited economic concerns, such as investor confidence, as a key reason for the coup. (Thailand’s tourism-heavy economy has struggled in the face of persistent unrest.)