New York Times finally gets it

While studying an unemployment graphic by The New York Times back in March, I observed that they (like the rest of the traditional media) were ignoring the fact that the quoted national unemployment statistic (U3) is too limited in its definition. For example, it excludes all the people who’ve simply given up looking for work because there just aren’t any jobs in the area. This makes employment look far better than it really is, and it helps boost the stupid claims that western Europe’s national unemployment rates are far higher than ours. I showed that using the lesser-known U6 Bureau of Labor Statistics measurement of unemployment, which I explain fully in that post, US and Western Europe have very comparable unemployment most of the time.

This month, finally, the NY Times posted a state-by-state interactive graphic that confirms what many bloggers (including me) have been saying for quite some time: unemployment is much worse than many people realize. The new graphic shows the U6 rate in each state, rather than the usual and more limited U3, and for several states the unemployment is actually over 20%. Here’s a non-interactive picture of the map (click for full version): 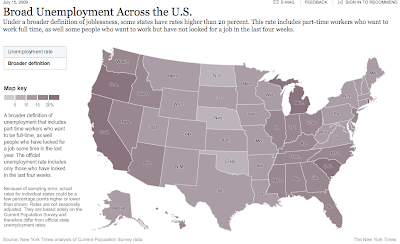 Some people may think the distinction doesn’t matter and is just semantics, but in the June data, the official rate was 7 points lower than the more accurate U6 rate of 16.5% unemployed nationally. Using the U6 unemployment rate, which used to be the definition of official unemployment until 1994, we can see that we have the worst unemployment since the Great Depression (not since merely the 1980s as the media insisted for a while. Making sure people understand the severity of the situation is the difference between pressure for critical government efforts to save the economy and spur recovery and public pressure to reduce the deficit and debt in the middle of a gigantic recession. The latter has been the worrying trend recently. And once we get out of this mess, U6 versus U3 is the difference between helping Michigan and the Rust Belt states climb out of their semi-permanent hole that existed prior to the recession and continuing with business as usual. 13% in Michigan looks much better than 22% unemployed. The post-recession part may be even more important, in terms of helping Americans in chronic localized recession.

While I laud the Times for their graphic earlier this month, they and others need to begin incorporating the broader definition into their reporting both nationwide and state-by-state. This shouldn’t be swept under the rug had a technicality. The government won’t change the definition back, I’m sure, because it’s like rose-colored glasses for the state of the economy. But the U6 figure is out there every month, and it takes about 5 seconds more to locate on the BLS website. The media just doesn’t want to waste time explaining the distinction to people.

Bill Humphrey is the primary host of WVUD's Arsenal For Democracy talk radio show and a local elected official. Follow him @BillHumphreyMA on twitter.
View all posts by Bill Humphrey →
Tagged  American-unemployment-series, U3, U6, underemployment, unemployment, United States.
Bookmark the permalink.