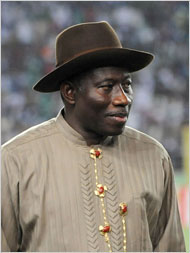 The National Assembly finally formally declared Nigeria’s Vice President Goodluck Jonathan the acting president, earlier this week, resolving the constitutional crisis of who was running the OPEC member nation that represents over 15% of Africa’s entire population, in the somewhat mysterious absence of President Umaru Yar’adua. Most of the American media had ignored the fact that the president had been in Saudi Arabia for medical treatment with no defined plans to return SINCE NOVEMBER. Nigeria’s Senate finally agreed to promote VP Jonathan after a BBC interview with President Yar’adua was released a month ago, in which he sounded very weak and again gave no indication of an imminent return. President Yar’adua repeatedly refused to issue a statement regarding a transfer of power for over 70 days.

The United States rushed to welcome him as Acting President because of the growing threat of instability as the political crisis continued. The US relies on Nigerian oil more and more every year.

I’m still baffled as to how this happened and why it wasn’t made into a big deal, as it should have been. In addition to an attempted major terrorist attack by a Nigerian, the country has faced some serious violence and rebel attacks, while the president has been gone.

Also, for the human interest angle, check out this article [dead link] on the amazing luck Acting President Goodluck Jonathan has had his whole life. He’s a zoologist and a hydrobiologist, who was an environmental minister briefly and fortuitously became governor after being chosen as a lieutenant governor in his state under a corrupt governor who resigned; then he was unexpectedly chosen as running mate by the outgoing president orchestrating the 2007 PDP ticket that won, and now he’s suddenly President. And what a boss hat he wears.