Matt is currently a university student in Britain, but he attended high school in the US with the co-editors of Starboard Broadside*, and he has provided us with his reaction to the inconclusive results of yesterday’s general election.

Well, Nick Clegg has said he won’t be giving any more speeches today, and after those of us who weren’t shut out of the poll station at 10 p.m (which wouldn’t have been a problem but for the bloody Labour government having all pubs shut at 11p.m.), there’s a prevailing feeling that our votes were denied a definite result. One generally expects when they go out to vote to know who’s running the country the following day. However, as exciting (read: worrying) as the results are, they were far from unpredictable. The “yellow tide” of Cleggmania may have fell short of a tsunami, but that’s only because of the very electoral system which Clegg has been critiquing from the start.

The system in the UK is confusing even to us, but to put it simply for American readers, the Lib Dems did do well for a third party, achieving 23% of the national vote (only 6% less than Labour), but the only thing that matters is the amount of seats that are won. In this “First Past the Post” system, whoever gets the most votes in each particular constituency goes to Parliament and the rest of the votes are thrown away. This is how the Liberal Democrats have only 2 million less votes than Labour but 200 less seats in the House of Commons, and this is why Clegg has been demanding electoral reform from the start. The reason this election is so exciting is because of the very issue of electoral reform which it has brought to the forefront, and which will play a decisive role in how the new government is formed.

Indeed, the chairwoman of the Electoral Commission has described the current system as “Victorian” and demanded an overhaul. While we claim with great pride that the voter turnout increased massively, the country was unable to handle this, and polling stations shut voters out after 10 p.m., leading to sit-ins at polling stations around the country, and even demands for another vote to be held.

The anxiety over the current state (or non-state, rather) of the UK government has negatively affected the British economy, with sterling falling from $1.4732 to $1.4678 during Cameron’s speech – this could not have been more badly timed given the current economic happenings. The fact of the matter is that while this country is currently in need of a strong government, we are now left with a minority one that will rely on either small-scale policy compromises between two parties who’s manifestos are on polar opposites, or something even scarier and more revolution-worthy such as a Labour coalition (and we grow tired of Mr. Brown) or a defunct parliamentary minority. While we may wonder who it was that the country really voted for, we can guarantee it was not a Conservative-Lib Dem quasi-coalition. This election’s most defining aspect is that it has disproved the reliability of our current system, and Britons are demanding change.

From his speech given this afternoon, Cameron is in no way proposing an official coalition, but rather, to use his own words, a government which will “try to find new ways in which Liberal Democrats can contribute” – i.e. making the coffee. Expect a cartoon to surface on the internet within a few days of (forgive the cheeky British banter) Clegg with a big “57” painted on his chest kneeling down and doing rude things to a wryly grinning Cameron sporting an even larger “305,” with a caption somewhere along the lines of “Cameron spurns coalition, opts for ‘special arrangement’ instead.” No one expects this government to last for more than a year (in the UK elections can be called at any time, there are no fixed terms). Cameron has, however, said that he will sate the appetite for electoral reform with an all-party Electoral Inquiry Committee, but anyone who has been following Conservative agenda knows that his only desire is to have constituency borders proportional to population size, which – while still progressive – does not address the issues posed by this election.

And if that prospect doesn’t seem uninspiring enough, we are all faced with the fact that Gordon Brown is still in office! In the situation where there is no clear majority, it is up to the prime minister to tender his resignation to HM the Queen and it is Her role to then invite a new prime minister to form a government. This might mean that if the politicians can’t sort it out themselves, then Buckingham Palace will have to make its own decision.

All in all, between a resurgent monarchy and a weak coalition, the results (or, as of yet, lack there-of) of this election have confirmed our anger with the electoral system and lead the way to a United Kingdom that is even less able to deal with either the ongoing or the impending financial crises.

In many ways, the 2010 campaign, which usually only begins about two weeks before the vote and lacks the fervour, budget, and mud-slinging that characterizes US elections, has changed the way Britons view politics. The TV debates between party leaders, the first ever in this country, turned Nick Clegg into a “white Obama,” and threw into question issues of Brown’s “lack of cheerfulness” as well as Cameron’s “old boy Oxbridge pretensions.” Indeed, Malcolm Gladwell proposed that the third debate be replaced with a drinking contest, with Brown on the infamously strong Scottish Tennent’s Extra, Cameron on the expensive champagne, and Clegg on the “home-made elderberry wine or whatever-the-fuck.” There was of course the fear of a “Mumsnet Election,” where Cameron was able to please the popular forum for “motherly issues” by talking about his own children and family life, while Gordon Brown lost mum-bloggers’ support for refusing to state his favourite biscuit, though he later cleared that up in a public statement following the media’s claim that it exposed his chronic indecision. The whole fiasco was reminiscent of an American election, but with its maternal biscuit banter was at the same time utterly British. Cameron, who is often described with words such as “slimy,” “sinister,” and etcetera (embodied in this photo), tried to play off the disgustingly artificial image of a true “family man.” “Webcameron” released a video on Youtube of himself discussing the latest Tory meeting while washing the dishes and being interrupted by his three-year-old daughter, and through his fake laugh you can almost hear him thinking “You filthy little Brat, I hate children and I’m glad I never was one.” All of the candidates and their wives are now on Twitter. There was also “Bigotgate,” where Brown accidentally left his microphone and was heard calling a woman he had just spoken to “bigoted,” making front page news and adding to the general perception of him as a big stormy raincloud grumbling through No. 10 yelling at his colleagues along with the rest of his angry Scottish lackeys (indeed he was almost sued over bullying allegations).

But in the end it doesn’t matter who eats what biscuit when the national debt is this high. Few people are of the opinion that the currently proposed government will last long or be able to implement necessary changes. It is, however, still up in the air, as to whether Cameron will have simply marched into No. 10 or the Queen is forced to take over, and I hope I can give a decisive update in the coming week. 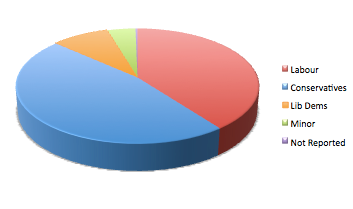 *This post originally appeared on Starboard Broadside, which has the same management team and co-founders as Arsenal For Democracy.