Home » Commentary » Arsenal Essay » What should the longer objectives be in Mali?

What should the longer objectives be in Mali? 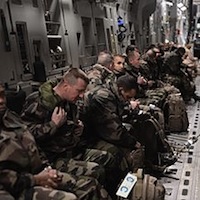