US embassy staff moved out of Libya

In response to the growing chaos in the battle for control of Libya’s capital, the United States has moved its embassy staff in Tripoli out of the country, to neighboring Tunisia.

Staff, including marine guards providing security to the embassy, have been transferred to Tunisia “due to the ongoing violence resulting from clashes between Libyan militias,” [the U.S. government said]. Secretary of State John Kerry said there was a “real risk” to staff.
[…]
The US embassy in Tripoli was already operating on limited staffing. All remaining personnel were driven overland to Tunisia in the early hours of Saturday. The US military said it had “assisted in the relocation” of embassy staff, using F-16 and MV-22 Osprey aircraft. It said the five-hour operation was “conducted without incident”.

Turkey and the United Nations also pulled out their staffs. 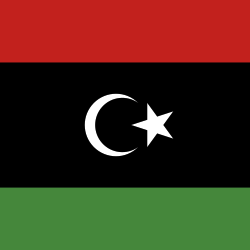 The recent disorder in the capital centers on the airport (and which militia will control it), but the clash there is part of a wider struggle for power across the country.

That crisis is currently pitting Islamist politicians and their militias, who have been in power at least until recently, against an opposition coalition of anti-Islamist militias, anti-Islamist armed forces divisions, and General Khalifa Hifter. You can read our background report on the situation for more details.