Home » Commentary » Arsenal Analysis » Yet another war about to erupt?

Yet another war about to erupt?

Oh, you thought world news couldn’t get worse? Wrong! It can always get worse. Nagorno-Karabakh, an Armenian-aligned breakaway region of Azerbaijan, has been frozen in a ceasefire with no final agreement for 20 years (after 6 years of brutal war), but just saw 15 soldiers killed in 4 days, as angry rhetoric rises. The dispute over the region led to an internal war in the southern Soviet Union and worsened after the Union broke up and stopped keeping a lid on things altogether. The new troop deaths are the worst in twenty years, though civilians are often killed near the war zone border. 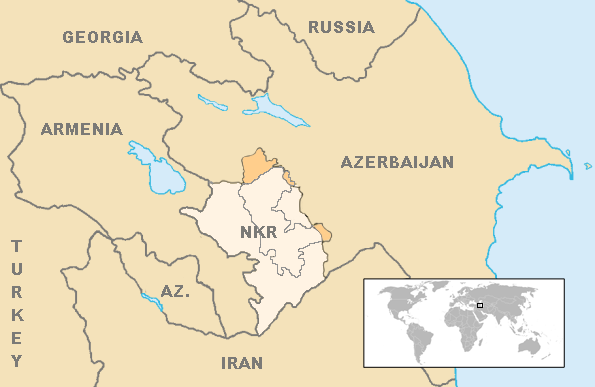 Nagorno-Karabakh region within Azerbaijan after the 1994 ceasefire. (Credit: Wikimedia)

Russia, while playing mediator (now and in 1994), is much more aligned with Armenia, which has been enthusiastically supporting recent Russian foreign policy when virtually no one else will. Iran and Turkey both have interests in the situation, due to proximity to it, as well as various historical ties or antipathies toward one or the other. Turkey opposed Armenia last time around, while Iran opposed Azerbaijan. (Iran’s government currently fears an Azeri unification movement more than they want to liberate another majority Shia population from secular rule as a second satellite like Iraq.)

The last war also somehow involved Afghan mujahideen at one point, so if we’re looking to open up not only another ex-Soviet conflict but also make it a holy war, this seems like the place.