Resistance against the police in Ferguson MO

Over the weekend, a cop in Ferguson, Missouri (in St. Louis County) shot and killed an unarmed Black teenager in the back. The local Black community, which has borne the brunt of law enforcement activities in recent years (especially as the city has rapidly gone from almost 50-50 Black and White to being two-thirds Black), was quite understandably very angry about the situation and began protesting. Despite the FBI being brought in to take over the investigation of the case, the situation has continued to escalate as Ferguson’s police department mobilized very aggressively against the protesters.

After some property damage occurred yesterday (though most of the protests were peaceful and undeniably reasonable), the standoff being the police and protesters became even more tense until this evening when the police began corralling and attacking the assembled community members.

Below are some firsthand videos posted by a City of St. Louis Ward Alderman, Antonio French:

That's me in the cloud of tear gas tweeting in #Ferguson. pic.twitter.com/9fMCdRGQYX

And here’s a report from NBC St. Louis:

200-300 police officers, up to 25 police departments in #Ferguson tonight according to @leisazigman

This aggression toward the community they are supposed to be protecting is yet another demonstration of the terrible results of Department of Homeland Security handing out grant money like candy to provide military-grade equipment and riot gear to local police forces all over the country.

Meanwhile, the U.S. media seems hellbent on driving the narrative that this story isn’t about the cold-blooded street execution of an unarmed child — or about the wider problem of police aggression and occupation of American black populations, or about legitimate resistance to unfair and violent practices. Rather, they’re obsessed with the idea that there might be “looting” happening or that there is a “riot.” 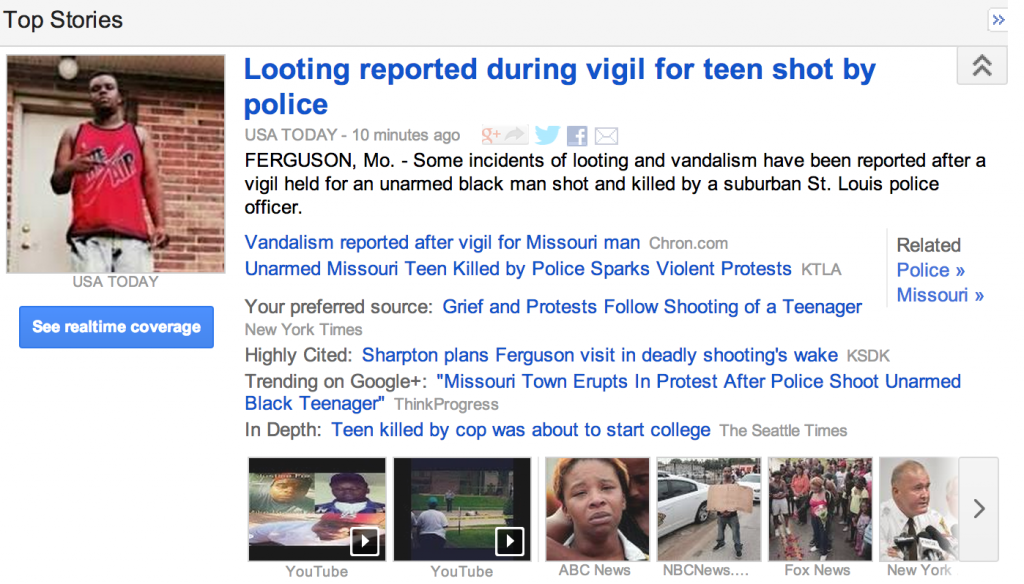 Here’s the reality of the situation: Unarmed Black American kids keep getting shot to death for no reason on the false assumption they’re packing, and there’s rarely any justice. Meanwhile, unhinged adult White American men with avowedly anti-government views can walk around unchallenged in public places with assault rifles, telling you all about their “rights” and how important those are.

Is this country ever going to stop perpetrating and ignoring outrageous daily violence against and extrajudicial executions of Black Americans?