Home » Arsenal Research » 8 Facts about King Moshoeshoe I: The Razor of Southern Africa

8 Facts about King Moshoeshoe I: The Razor of Southern Africa

Introduction: King Moshoeshoe I, founder of Lesotho, reigned from 1822 to his death in 1870, during a period of immense tumult in southern Africa. He waged one of the most effective resistance efforts to colonialism (from the Dutch Boer settlers and British Empire) over many decades, as well as to Shaka’s military consolidation of what became Zulu Kingdom in the 1820s.

His name was originally a nickname derived from a poem he wrote as a youth, a braggadocio-filled anthem to farm animal theft that could put most hip-hop moguls to shame. From the poorly sourced Wikipedia version of the story:

During his youth, he was very brave and once organised a cattle raid against Ramonaheng and captured several herds. As was the tradition, he composed a poem praising himself where, amongst the words he used to refer to himself, said he was “like a razor which has shaved all Ramonaheng’s beards”, referring to his successful raid. In Sesotho language, a razor makes a “shoe…shoe…” sound, and after that he was affectionately called Moshoeshoe: “the shaver”.

He also wore an appropriately supreme tophat and cape, like the badass king he was. 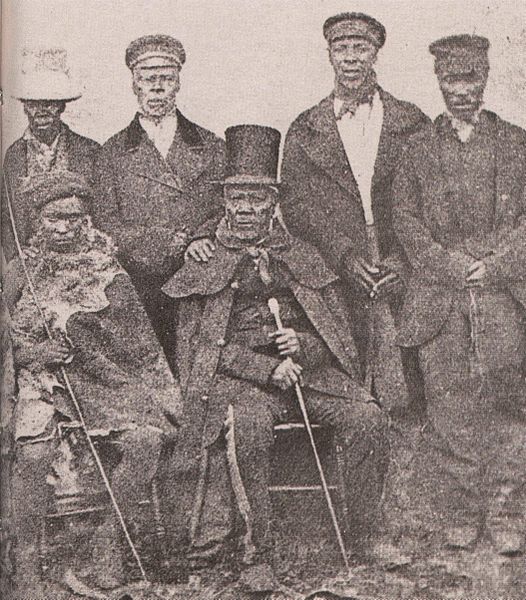 King Moshoeshoe I with his ministers of state (Bensusan Museum, Johannesburg – Wikimedia)

Additional claims to fame include:

While this did eventually make Lesotho into a colony, it remained separate and intact from British South Africa and Apartheid South Africa both during and after its colonial phase. The monarchy still survives to this day (now in constitutional form) and the Sotho culture endures. Compared to how many of the surrounding areas fared, the decision to pitch a deal to Queen Victoria makes King Moshoeshoe I look pretty insightful.