Perhaps there has been too much engaging of certain uncooperative and undermining stakeholders in the climate change policy discussions. As one of the world’s largest climate action protests ever unfolded this weekend, Anna Lappé makes that case in a new Al Jazeera America op-ed entitled “What climate activists can learn from the fight against Big Tobacco”:

Progress has been stalled in part because the biggest polluters in the world — those oil and gas companies responsible for the lion’s share of emissions, for example — have been given a seat at the negotiating table, treated as partners and stakeholders at the annual global meetings called the Conference of Parties, or COP. Over the years, these COPs have featured industry-sponsored pavilions, dinners and breakaway meetings. And companies have been granted official observer status through their industry trade associations, which are considered nongovernmental organizations under current climate meeting rules. Some have even attended as official members of country delegations. (For instance, a representative from Shell joined the Nigerian delegation to COP16 in 2010 and Brazil’s to COP14 in 2008.)

As climate activists call for governments to take real action on climate, the decades-long fight against Big Tobacco — specifically, how public health advocates successfully kept companies away from the negotiating table — holds powerful lessons for the role industries should have in these key talks.

It would be one thing if the oil and gas companies were actively interested in pursuing new energy strategies or diversifying their future plans into new and cleaner areas, but as she notes they are spending a lot of money trying to undermine the case that new regulations or laws are even needed in the first place. And in that regard they are probably forfeiting their right to have a seat at the table as stakeholders.

Incidentally, that mention of the Shell rep serving on the delegation from Nigeria in 2008 and 2010 is very unsurprising. As I explored in an article in January 2011, entitled “The Nigerian Republic of Royal Dutch Shell”, on the Nigeria-specific revelations from the leaked diplomatic cables a few years ago:

Royal Dutch Shell has essentially become, according to the company itself, the industrial octopus inside Nigeria’s government, even in the “democratic” era…

The ambassador reported: “She [Ann Pickard, then Shell’s vice-president for sub-Saharan Africa] said the GON [government of Nigeria] had forgotten that Shell had seconded people to all the relevant ministries and that Shell consequently had access to everything that was being done in those ministries.”

Until now, most of the discussions have included oil and gas lobby folks on the theory that their “buy-in” would be critical to producing actionable plans for dealing with climate change. But what if they just refuse to buy-in? It should be clear after more than two decades of efforts that they aren’t really interested in taking the transformative steps necessary to bring their businesses into the future. At this point, they have too much influence at the table, rather than not enough. The fight against Big Tobacco is probably a useful analogy. 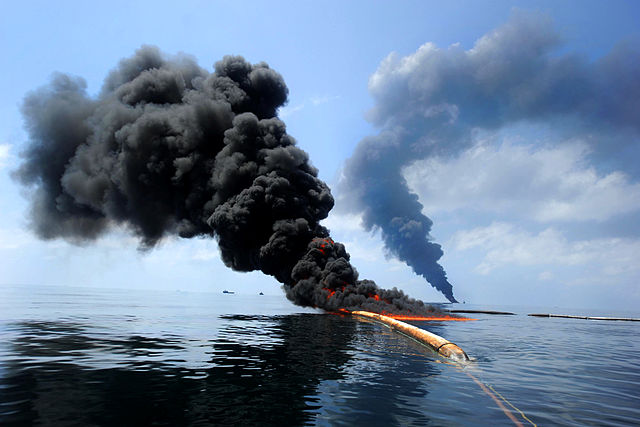 Dark clouds of smoke and fire emerge as oil burns during a controlled fire in the Gulf of Mexico, May 6, 2010. The U.S. Coast Guard, working with BP, local residents and other federal agencies, conducted the burn to help prevent the spread of oil following the explosion on Deepwater Horizon, an offshore drilling unit. (Credit: US Navy via Wikimedia)