Up to 300 Libyan ISIS combat veterans from the Mosul campaign with 500 backing fighters and official recognition from Abu Bakr al Baghdadi, officially just captured the Libyan city of Derna. This final action apparently followed a two-month stealth maneuver inside the city to pave the way — targeting various rival Islamist leaders and anti-Islamist authorities — which was led by a senior Iraqi ISIS officer. The #Barqa tag on Twitter has a flood of photos showing the ISIS-led troops parading into the city in a large convoy of pickup trucks that have become so synonymous with both Libyan militias and the ISIS brigades in Iraq.

The group is proclaiming Derna the new local capital of the “Barqa Province” of the Islamic State, in emulation of the so-called “Forat Province” in eastern Syria and western Iraq. (As I noted in an earlier post on anti-Islamist secessionists in the same region, Barqa is the Arabic name for the eastern Libyan region usually known in Europe and America as “Cyrenaica.”) The city of Derna was a notorious contributor of foreign Islamic fighters to the Middle East during the Qaddafi years, so these ISIS fighters are mostly all locals coming back home.﻿

Strategically, ISIS-Libya believes that control of Derna will cut off or reduce major highway access between the Tobruk government and the Islamist-besieged city of Benghazi, Cyrenaica’s largest city. 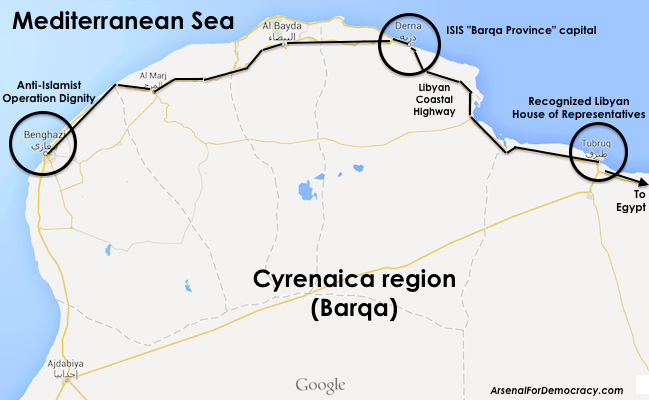 A statement issued by ISIS-Libya (not central command in Syria) indicates this intent and a wider intent to vigorously counter the anti-Islamist Operation Dignity forces of General Hifter. From analyst Aymenn Jawad Al-Tamimi’s translation of the statement:

The sons of the Islamic State in Derna resolved to take revenge on all who participated with, supported or aided Heftar in his war on our mujahideen brothers in Benghazi […] In support of our mujahideen brothers in Benghazi, a great convoy of the lions of the Caliphate came out to cut off the path and resist a great convoy coming out from Tobruq with 15 tanks headed towards Benghazi. On the arrival of the Dawla’s vanguards to cut off the reinforcements, the apostates heard of the arrival of the Islamic State’s convoy, so they sent in their aircraft and returned to Tobruq. And the Islamic State’s convoy returned safely, having accomplished its mission.

Hifter’s personal army and the Libyan military, as I noted in my earlier post, are being more or less crushed in Benghazi, representing eighty percent of all deaths (military, Islamist, and civilians) in Benghazi from mid-October to mid-November alone.

A third putative “Islamic State province” is also emerging in the Sinai Peninsula of Egypt, as Ansar Beit al-Maqdiss — Egypt’s most prolific terrorist organization since the fall of Mubarak in early 2011 — joins the ISIS fold (France24 video news report), but they are (to my knowledge) all local Egyptians and not veterans of the ISIS campaigns in Syria and Iraq. For the moment, I would not consider them to be fully integrated with the so-called “Islamic State.”