Home » Commentary » Arsenal Essay » When The Party’s Over: The 1820s in US Politics

When The Party’s Over: The 1820s in US Politics 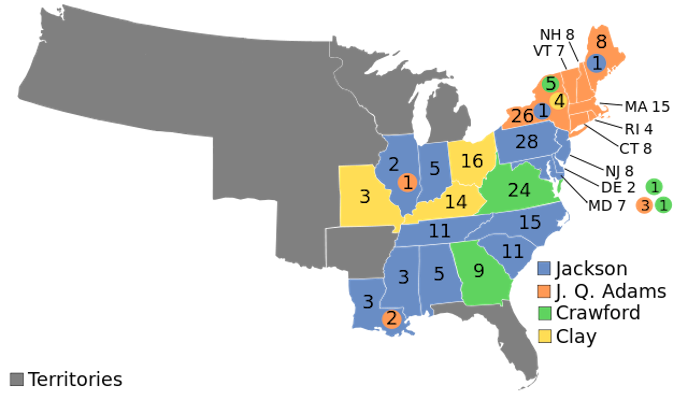 The large influx of new voters also still needed to be managed, particularly by the opposition. The three big (or sort of big) parties in 1832 — Democrats, National Republicans, and Anti-Masons — held national conventions (all in Baltimore) as part of this democratization and party-organization push. Democrats, however, still clearly held an organizing advantage.

They triumphed again in 1832, which had seen a 3-way race between President Jackson, the National Republicans, and the Anti-Masons. This repeated failure (at that point three consecutive elections lost at the ballot box, if you remember the popular result of 1824!) and the continued growth of the Anti-Masons and Nullifiers in Congress prompted the desperate need for re-organization in the opposition. The National Republicans merged into the Whig Party in 1833, along with various other political clusters and small parties that were left out of politics by either the Jackson faction or the destruction of the Federalists decades earlier.

Unfortunately, this attempt at merging the opposition factions into the Whig Party went poorly at first. The Democrats still captured 59% of the House seats in the 1834 midterms, despite the third and fourth parties finally receding (to the Whigs’ advantage). Then, worse, the 1836 presidential election saw Democratic Vice President Martin Van Buren win a staggering five-way general election race, defeating almost by default the four Whig nominees — but with just 50.83% of the popular vote and an electoral college margin above the crucial majority-line of just 22 electors.

Assuming (and I realize it’s a big assumption for the time) that the election was above-board and not bought, had just 4,300 Pennsylvania voters gone against Van Buren, flipping 30 electoral votes, the 1836 presidential election would have landed back in the U.S. House like 1824. (Or, if you prefer, 7,200 Virginians could have flipped for 23 electoral votes. Even Van Buren’s home state of New York was pretty close and would have prevented a majority, had it gone against him. He lost it four years later when he was defeated.)

However, the 1836 election, while a presidential fiasco for the Whigs, did put the Whigs just 22 seats short of a House majority, which finally proved its viability as a unified national opposition party against the Democrats. The other two parties receded even further. After the 1838 midterms, the Democrats held the chamber by just 3 seats.

Not until 1840 did the opposition (Whigs and beyond) get its act together and nominate only one presidential candidate against the incumbent Van Buren, which proved a briefly successful formula. In addition to taking the White House, the Whigs also finally captured the U.S. House majority and eliminated or adopted any rival opposition parties’ candidates. Only 2 representatives were even elected as independents.

But, for the period from 1824 to 1839, or four presidential cycles and nine Congressional elections, there was essentially not a stable 2-party system in the United States — and even a mere 3 factions was unusual. At the end of it, there had been a total re-alignment and the emergence of essentially two new major parties.

The period was a chaotic response to a rapidly changing and more engaged electorate, hellbent on reducing elite power and destroying many longstanding governmental and financial institutions. That was something the super-wealthy populist slaveowner Andrew Jackson harnessed very effectively, when he wasn’t challenging people to single combat.

I didn’t even realize this post was going to end in an inadvertently very specific Donald Trump comparison when I started it. Go figure.