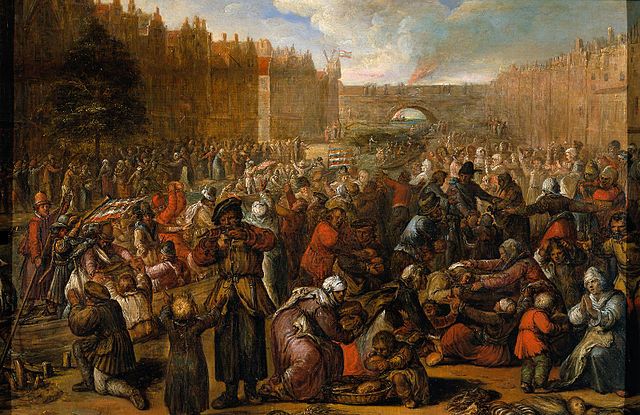 That is probably for the best, from the world’s perspective, and from the country’s, since rule by a narrow slave-owning elite is not exactly a paragon of excellent governance for the world to follow.

From Representative Democracy Back to Republic?

The framers of the U.S. constitution, inspired by the Dutch Republics and the city-state republics of what is now northern Italy, originally set out to create a government with very restricted participation.

They wanted to prevent mob rule and other failings of Athenian direct democracy. While in abstract this may have been a good goal, their initial system was so elitist and exclusive that it provided a very poor beacon for the rest of the world. Fortunately, no sooner had the Constitution been ratified than it began to turn (slowly) into a more inclusive system.

Over time, indirect elections would become more direct. Voting rights expanded to include more and more people. The supremacy of the union government was asserted over that of the united, sovereign states.

What was intended as an elite “republic, if you can keep it” (as Benjamin Franklin put it) soon evolved into a representative democracy. This, in turn, became an inspiring model for many other countries, with or without monarchies, in a way that an oligarchic network of local “republics” never could have.

From a global perspective, and for the United States, that is a positive evolution. But it is not the system the founding fathers of the union or the framers of the U.S. republic foresaw.

Most Americans have written off the original elitism (which manifested itself from the electoral college to property requirements) and ugly sides of the founders (slave-owning, etc.) as an imperfect step on that road toward “a more perfect union,” as the preamble to the U.S. Constitution proclaims.

As if to counteract the gradual slide from a republic to a representative democracy, an increasingly radical strain of conservatism has recently been doubling down on “original intent” theory — to an unprecedented degree.

Their ideology — primarily the deification of the founders — is so literal that they are proclaiming a need to restore a real republic of assembled, “united” “states” (two meaningful, separate words vs. an empty, compound name). They reject this centralized representative democracy masquerading as one.

The possibility that the country’s fathers might not have been all-knowing oracles with the perfect vision for the nation’s ideal system of government permanently is not entertained by these — still mostly white — gentlemen. To them, the original Constitution cannot fail, it can only be failed.

And fail “we the people” have, in their eyes. The very existence of government by hoi polloi (“the many”) in this country, they feel, is a travesty and a betrayal of the founders.

This resistance to democracy has taken many paths toward the same end conclusion. In one route, they have defended the goal of complex voter identification laws — to restrict voting rights to exclusively those who truly deserve it.

The young, the racial minorities, the women, the property-less? To a lower-case “republican,” all of those citizens surely do not deserve any say in the election of the nation’s “philosopher-kings” who will collectively and wisely govern a true republic. If the 18th century founding fathers did not need to hear those voices to legislate on their behalves, neither do we in the 21st century! Including them clearly violates original intent.

In another route of resistance to the slide away from the founding vision, a Nevada rancher, Cliven Bundy — his regressive racial views aside — has declared his refusal to recognize the federal government (to which he owes nearly a million dollars in back fees for use of public resources).

His reasoning (shared by many radicals)? Every state within the United States is a sovereign, co-equal republic within a voluntary union. This applies even to the state of Nevada, added to the union 75 years after the U.S. Constitution’s Article VI made clear the supremacy of the federal government over the previously loose collection of states that left Britain together.

Or so he asserts when the taxman arrives.

Finally, there is the growing movement to repeal the 17th Amendment of 1913 that established the direct elections of U.S. Senators. Ever since 1913, the “riff-raff” — i.e., regular Americans — has been able to vote on who represents their state in the upper house of the U.S. Congress.

Direct election of Senators? Imagine that! The Roman republic would have been appalled — and so should we be, apparently.

Moreover, the anti-democracy forces believe the 17th amendment is fatally flawed. How so? Because it takes away the power of the governments of the sovereign “states” to choose their own “ambassadors” to the federation.

Although these positions are predominantly embraced on the conservative fringe — a fringe which amazingly now extends into both chambers of the U.S. Congress — this radical “republicanism” fuses perfectly with the mainstream conservative drive over the past decade-plus to export “freedom” to Kabul and Baghdad.

At great cost of American blood and treasure, the United States can proudly say that it successfully exported non-representative republics governed by elite factions, to the Middle East, North Africa and Southwest Asia. Let freedom ring!

A spectacular act of escapism

It certainly takes to a new level political nostalgia for a time that never was, to pine for a 1787 U.S. that existed on paper briefly before being (thankfully) swept aside by its own momentum.

Today, one can hardly walk around without tripping over a self-righteous tea partier who is more than happy to remind one, knowingly, that, “the United States is a republic, not a democracy,” as if the rest of the country — or the world — is missing a key distinction.

Of course, the rest of us Americans are not trying to live in the American version of the 16th century Republic of the United Netherlands. We are happy to keep working on tinkering with and improving the system to make it serve the people — all of them — better.

That, after all, was and is the core promise of the U.S. Republic, rightly understood — if not “right-wingly” understood.