Props to the CIA for honestly checking itself:

The still-classified review, one of several C.I.A. studies commissioned in 2012 and 2013 in the midst of the Obama administration’s protracted debate about whether to wade into the Syrian civil war, concluded that many past attempts by the agency to arm foreign forces covertly had a minimal impact on the long-term outcome of a conflict. They were even less effective, the report found, when the militias fought without any direct American support on the ground.

Almost the only “success” in arming rebels (as opposed to governments) was Afghanistan in the 1980s, according to their own internal review, and we all know what happened as a direct result of that.﻿

Too bad President Obama, who seemed swayed by the study for some time, reversed course in September of this year and ordered an incomprehensible and ineffective program to arm and train Syrian rebels extremely slowly, narrowly, and pointlessly.

As I asked then:

Why do we have to provide military training and weapons to uncontrollable non-state actors in an already brutal civil war? Is it worth going through this effort and incurring this risk to help a declining rebellion that might even be over by the time these fighters arrive? Are we potentially making the situation for civilians in Syria worse by introducing a new source of destruction and death, rather than letting this war come to a finite end? 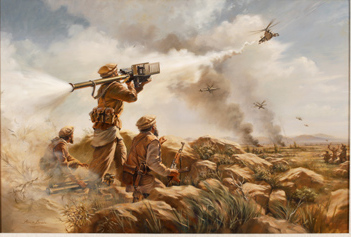