Home » Commentary » Arsenal Analysis » Mexico’s war: Still a bigger threat to the US than Syria’s

Mexico’s war: Still a bigger threat to the US than Syria’s

There are heavily armed militant groups with substantial military experience terrorizing, extorting, and beheading people in a major oil-producing desert country to the south of a NATO member, who have had a destabilizing effect across borders in a wide region encompassing many countries. They lack popular support and rule their territory primarily by fear. They are the Mexican cartels, and we haven’t bombed them at all (unlike ISIS), even as they have captured and held territory for years on end.

That parallel occurred to me a number of weeks ago, when I was reading up on the development of Los Zetas, the cartel that emerged from the Mexican military itself, but I didn’t have enough hard numbers to back up the argument. Then I read this article by Musa al-Gharbi.

The overall numbers are astonishing:

A recent United Nations report estimated nearly 9,000 civilians have been killed and 17,386 wounded in Iraq in 2014, more than half since ISIL fighters seized large parts on northern Iraq in June. It is likely that the group is responsible another several thousand deaths in Syria. To be sure, these numbers are staggering. But in 2013 drug cartels murdered more than 16,000 people in Mexico alone, and another 60,000 from 2006 to 2012 — a rate of more than one killing every half hour for the last seven years. What is worse, these are estimates from the Mexican government, which is known to deflate the actual death toll by about 50 percent.

ISIS is held up, as well, for its barbarity. But the cartels in Mexico have them beat there too:

Statistics alone does not convey the depravity and threat of the cartels. They carry out hundreds of beheadings every year. Beyond decapitation, the cartels are known to dismember and otherwise mutilate the corpses of their victims — displaying piles of bodies prominently in towns to terrorize the public into compliance. They routinely target women and children to further intimidate communities. Like ISIL, the cartels also use social media to post graphic images of their atrocious crimes.

The narcos also recruit child soldiers, molding boys as young as 11 into assassins or sending them on suicide missions during armed confrontations with Mexico’s army. They kidnap tens of thousands of children every year to use as drug mules or prostitutes or to simply kill and harvest their organs for sale on the black market. Those who dare to call for reforms often end up dead. In September, with the apparent assistance of local police, cartels kidnapped and massacred 43 students at a teaching college near the Mexican town of Iguala in response to student protests, leaving their bodies in a mass grave, mutilated and burned almost beyond recognition.

There has been a far more systematic campaign against reporters and citizen journalists in Mexico than anything we’ve seen from ISIS.

While the Islamic militants have killed a handful of journalists, the cartels murdered as many as 57 since 2006 for reporting on cartel crimes or exposing government complicity with the criminals. Much of Mexico’s media has been effectively silenced by intimidation or bribes. These censorship activities extend beyond professional media, with narcos tracking down and murdering ordinary citizens who criticize them on the Internet, leaving their naked and disemboweled corpses hanging in public squares.

The treatment of women is at least as bad under the Mexican cartels as under ISIS but on a much vaster scale:

[…] Westerners across various political spectrums were outraged when ISIL seized 1,500 Yazidi women, committing sexual violence against the captives and using them as slaves. Here again, the cartels’ capture and trafficking of women dwarfs that of ISIL’s crimes. Narcos hold tens of thousands of Mexican citizens as slaves for their various enterprises and systematically use rape as a weapon of war.

U.S. airstrikes this summer in Iraq began when ISIS forces came within a few dozen miles of the U.S. consulate in Erbil in the Kurdistan Region of Iraq, while U.S. airstrikes in Syria came after two beheadings in Raqqa, Syria. How does that stack up with Mexico?

U.S. media have especially hyped ISIL’s violence against Americans. This summer ISIL beheaded two Americans and has warned about executing a third; additionally, one U.S. Marine has died in efforts to combat the group. By contrast, the cartels killed 293 Americans in Mexico from 2007 to 2010 and have repeatedly attacked U.S. consulates in Mexico. While ISIL’s beheadings are no doubt outrageous, the cartels tortured, dismembered and then cooked one of the Americans they captured — possibly eating him or feeding him to dogs.

Cult-like pseudo-military organizations controlling large swathes of territory and local government administrations in one of the world’s largest oil producers, while threatening and attacking American citizens and interests regularly, but the United States doesn’t intervene militarily? How bizarre.

Perhaps it’s just politically easier to conduct airstrikes in Syria or Iraq (than it would be in Mexico) without getting substantive push-back from the governments. Maybe that’s why there’s a double standard. (And I’m not saying this to make an argument for a U.S. military intervention in Mexico, since that would be the wrong approach, too.)

But Gharbi also makes the case in the article — one which I’m strongly inclined to agree with — that the U.S. attention to ISIS is motivated by Islamophobia more than strategic interest. I think it’s no accident that Republican members of Congress are more likely to fabricate elaborate tales of Islamist groups like Hamas and Hezbollah crossing into the U.S. from Mexico to stage attacks than to talk about actual infiltrations by Mexican cartels to murder U.S. citizens. (I guess they just lump the latter in under a general antipathy toward all Mexicans entering the United States.)

Another argument for intervening against ISIS, in Iraq at least, was that we owed it to the people of Iraq (including but not limited to our Kurdish allies) to protect them from some of the unintended consequences of our actions. But the United States has arguably done more, historically, to destabilize Mexico than it has done to destabilize Iraq, so we probably owe them more.

Moreover, while we don’t buy oil from ISIS, our population does buy a vast sea of illegal drugs from the Mexican cartels. We are directly fueling and arming this conflict in Mexico.

This is the most egregious and unjustifiable strategic blind spot the United States currently has anywhere in the world. Every argument raised for the aggressive response toward ISIS could have been (and still can be) made toward the ongoing conflict in Mexico, and yet only one situation earned the response. That should raise serious questions about U.S. policy in both places, as well as questions about how we assess threat severity and then how we handle it. 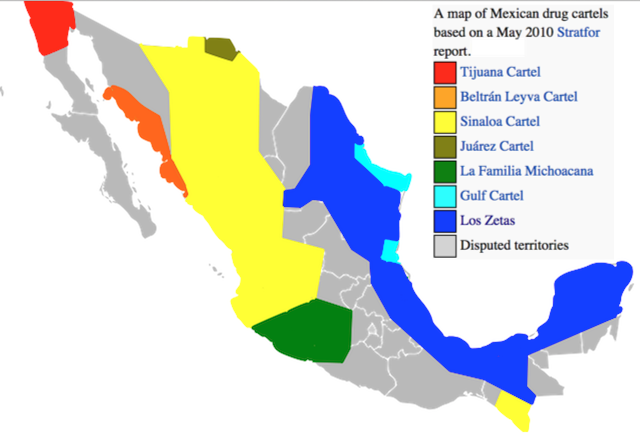 May 2010 map approximating Mexican cartel territory as it stood several years ago. Military efforts to control them have been scaled back since then. (Credit: Wnt – Wikimedia)