The American South: Take the Money and Run | The Globalist

For all the Republicans’ anti-government rhetoric that carries so well in the American South, their dirty little secret is that most southern and rural states receive more funding in federal tax dollars than they pay.

In contrast, most urban and northern U.S. states pay more money in federal taxes than they receive from the U.S. federal government.

But one may wonder justly where the money goes, since it clearly does not go into investments or programs that benefit the people.

Southern states have cut funding for education, rather than pay for public benefits, invest in the future — or build out their state’s infrastructure.

Researchers at the consumer finance web site Wallethub compiled data on all 50 U.S. states and analyzed the return on investment from federal taxes to each state, as well as the relative contribution of federal funding to the state’s economy and the number of federal employees per capita in each state.

The findings show, for example, that for every $1.00 a taxpayer in Mississippi pays to the United States, s/he receives $3.07 in benefits. Moreover, more than 45% of the economy of Mississippi comes from federal funding.

In Georgia, taxpayers receive a modest $1.05 for every dollar paid to the U.S. government. Still 38% of the state’s funding comes from federal money.

Despite these wealth-transfers, what do those mostly southern or rural states have to show for it? Forbes lists only one university in the South (Duke in North Carolina) as being among the top 20 in the United States.

The southern states perform poorly on most public health and education statistics, usually landing at the bottom. Poverty and low incomes remain a fact of life.

Sadly, the list goes on and on. The South also gives the rest of the country headaches over issues that were thought long past, including the fight against (!) women’s equality.

The saddest part, of course, is that these states — while grandiosely touting the rule of law – are instead ever more governed by the rule of the gun.

Most recently, in mid-March of 2014, the Georgia state legislature fought hard to establish its leadership position in what can only be deemed the national legislative insanity index. It voted to allow guns in airports (what could go wrong there?), bars, churches, school zones — and pretty much everywhere.

Don’t blame this act of madness on the Southern states’ populations, though. In Georgia’s case, 70% of the public is opposed — as are the state’s Sheriff’s Departments, the restaurant association, the transportation association and the Evangelical and Catholic churches.

Curiously, the list of the forces opposed includes pretty much everybody whose interests the Georgia legislature says they are protecting. And they call that democracy? Hijacking of the popular will would be much closer to the truth.

Just what constituency are the legislators actually representing? While they don’t like to say so out loud, they evidently represent the National Rifle Association – and apparently also ALEC, the American Legislative Exchange Council. The latter is a corporate-sponsored and dogmatically ideological organization that writes “model legislation” that state legislatures adopt verbatim.

Culture wars are bleeding the life out of politics

Given all these “priorities,” what’s in it for the people? Not much. The U.S. culture wars used to be fought out over such issues as abortion and the pill. With the salience and appeal of that particular drawing card receding, southern governors are grabbing for the next best incendiary thing – guns.

What gets completely lost in all the brouhaha is any notion of doing what politics is (usually) all about — improving the life circumstances of the largest number of people in one’s domain. That used to be the safest path to secure one’s own reelection.

In the end, all the culture wars boil down to this one question: Why should the governor of a southern state care about the poor residents in his own state? That is apparently very un-southern.

The southern states have the highest obesity rates in the country, which is associated with a variety of other health problems.

Four of the five states with the lowest per capita income are southern states. Based on U.S. Census data, Mississippi is dead last at 50th, West Virginia is 49th, Arkansas is 48th, South Carolina is 47th and Louisiana is 46th.

Unfortunately, the poverty rate for African Americans is high overall, even in states in which they represent a very small percentage of the population (e.g., the northern Great Plains states, such as the Dakotas), but especially in the South (e.g., Arkansas, Louisiana, Mississippi, Alabama and Kentucky, where it stands at more than 30%).

Texas likes to emphasize that it has the highest business-incentives in the nation. It is mum about the fact that it also has among the lowest high-school graduation rates and among the worst children’s health in the United States.

To add insult to injury, Texas made draconian budget cuts, hitting education and Medicaid. That hurts children most.

Rather than help the poor, responsibility is placed upon the poor and disenfranchised people – of all ethnicities – to change a self-destructive landscape on their own. ▪ 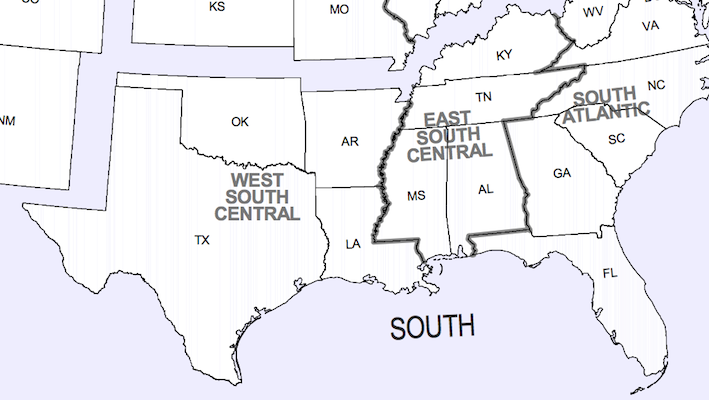 Bill Humphrey is the primary host of WVUD's Arsenal For Democracy talk radio show and a local elected official. Follow him @BillHumphreyMA on twitter.
View all posts by Bill Humphrey →
Tagged  American South.
Bookmark the permalink.