The Battle for Xinjiang (and its energy riches)

One of areas of China bordering central Asia (including a small border with northern Afghanistan, which became important by accident during the U.S. invasion of that country in 2001) is China’s Xinjiang Autonomous Region. Over the past year, there have been a rising number of terrorist attacks on civilian targets in this region, and in other areas of China, performed by separatists from that Xinjiang Region.

Xinjiang, or the “New Frontier” from eastern China’s perspective sometimes, is formerly known as Chinese or East Turkestan in most maps from the Western World. It is China’s largest administrative area and is located in northwest China, north of the Tibet region. Very strategically, it shares borders with several former Soviet Republics, plus Afghanistan, Pakistan, and India. 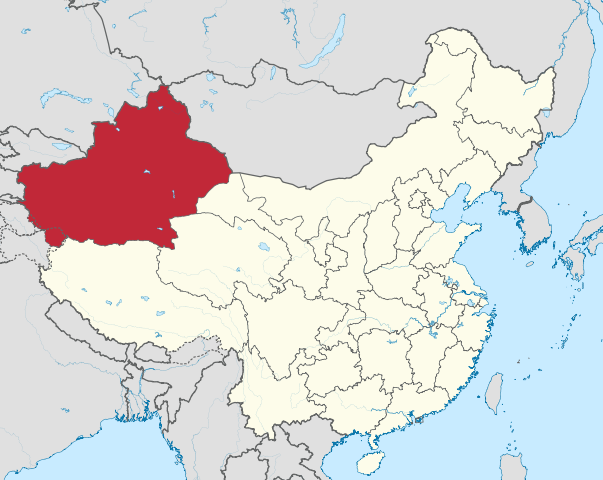 Map of the de facto territory of the Xinjiang Autonomous Region in China. (Credit: TUBS – Wikimedia)

Xinjiang is nearly evenly split between China’s overall majority ethnic group the Han and the ethnic minority Uighurs (also spelled Uyghurs) — who are the largest ethnicity in the Xinjian region, a situation which is highly unusual for Chinese minority ethnic groups nationwide and which has fueled a lot of tension.

They are, essentially, another of the many small and diverse warrior cultures of Central Asia, which we’ve seen in action in Afghanistan and Pakistan throughout the 1980s, 1990s, and the past decade — except that they (now) happen to fall within China, on the map, as opposed to one of the “Stans.” And indeed they are more closely related to the ethnic groups in those areas than to the rest of China, which is one of the exacerbating sources of conflict.

But beyond the War on Terror, according to a report in The New York Times, there is also an almost mind-blowingly huge potential for energy production and distribution, which is being developed as fast as possible now. And that potential is probably the real reason the People’s Republic of China has been so determined since the 1950s — when the first very major oil field was definitively identified — to hold onto and dominate the Xinjiang region, especially now that the rest of China has such a large need for fuel and power.

At this point, Xinjiang’s strategic energy value is so high to the rest of China and the national government, that probably no amount of separatist unrest will shake them or slow down their energy economy development of the area. Here, from the Times report, is what they are working with …

The foundation of Xinjiang’s energy economy is oil. Xinjiang has an estimated 21 billion tons of oil reserves, a fifth of China’s total, and major new deposits are still being found. This month, a state-owned oil company announced its greatest discovery of the year here, a deposit estimated to have more than one billion tons of oil on the northwestern edge of the Dzungarian Basin, not far from Karamay’s fields. Xinjiang is expected to produce 35 million tons of crude oil by 2020, a 23 percent increase over 2012, according to the Ministry of Land Resources.

Xinjiang also has the country’s largest coal reserves, an estimated 40 percent of the national total, and the largest natural gas reserves. Those three components form an energy hat trick that China is capitalizing on to power its cities and industries.

The main state-owned electric utility, the State Grid Corporation of China, is investing $2.3 billion over the next year to build high-voltage lines, according to People’s Daily, the main party newspaper. Xinjiang will export electricity to more populated parts of China and perhaps to Central Asia.

“Xinjiang is where all the growth in oil, gas and coal is going to be coming from,” said Lin Boqiang, an energy scholar at Xiamen University and adviser at PetroChina, China’s biggest oil producer. “Second, all the imported resources from Central Asia, oil and gas, go through Xinjiang and then get distributed from there.”

Pipelines already transport natural gas from Central Asia and Xinjiang to central and eastern China. A new pipeline from Western Siberia is expected to transport 30 billion cubic meters of gas per year through the Altai Mountains to central Xinjiang, where it would connect with domestic east-west pipelines.

In that light, probably the best the Uighurs of Xinjiang can hope for is additional autonomy (including religious and cultural identity autonomy, as well as freedom from ethnic and religious discrimination in government policy) and more importantly a new revenue-sharing deal to give them more of the export profits and a higher standard of living. Independence or maintaining a Uighur plurality in the region’s demographic breakdown (i.e. keeping out more Han Chinese residents and workers) are just probably not on the table anymore.