For the past year, the US State Department has stridently rejected the use of localized ceasefire-and-surrender deals brokered by the UN (recap explanation below) as a tool for winding down the overall conflict in Syria. Now, Secretary of State John Kerry appears to have opened the door to the piecemeal peace strategy (or at least accepted it might be a valid component of an overall strategy):

Mr. Kerry’s support for the Russian and United Nations initiatives comes at a time when the American-led push to negotiate a solution to the bloody Syria conflict has lost momentum. [UN envoy] Mr. de Mistura’s step-by-step strategy to de-escalate the civil war has been attracting growing interest among some Obama administration officials.

Mr. Kerry said before the failed peace talks in Geneva last year that the United States’s goal was a transitional government in Syria that did not include President Bashar al-Assad. But Mr. Kerry refrained from making such an explicit demand in his remarks on Wednesday; instead he urged the Syrian leadership to reconsider what it is doing.

This marks a significant shift, it would seem, and opens up a lot more realistic outcomes than are found by steadfastly clinging to an opposition government without authority and a rebel coalition without military dominance against a leader who is no longer likely to be toppled.

Two months ago, remember, the administration was not amenable to the idea at all:

…at the moment, the United States hasn’t even applauded the existing diplomatic progress, remaining hung up on unrealistic regime change objectives instead of seeking to stop the killing. State Department Spokeswoman Jen Psaki blasted the truce proposals on Monday, saying “Unfortunately, many local truces achieved thus far have more closely resembled surrender arrangements,” without acknowledging that halting the fighting and withdrawing doomed rebel forces is translating into hundreds (probably thousands) of civilian lives being saved.

From my previous explanation of localized truce deals in Syrian cities:

They [UN go-betweens] negotiate mini-deals all over the place […] to freeze fighting temporarily and pull back the combatants from direct clashes. The deals establish Army-held perimeter checkpoints (satisfies the government even if they temporarily cede ground within the perimeter), hand interim governing authority to the FSA within the perimeter without giving up their guns (satisfies the rebels), and allow the UN to send in food and medical supplies (helps the civilians inside).

When an area is no longer viable to resist Army (or pro-Army paramilitary) advances, fighting stops and the FSA fighters evacuate on buses with their weapons and any civilians who want to leave, and then the Army marches in to re-take control. This scenario has played out in places like Homs (the now-fallen middle hub of the western rebellion, centrally located between the capital and Aleppo) and repeatedly in metro Damascus.

The report by Integrity Research & Consultancy, cited in the NY Books […] found 15 successful local truces had been reached and implemented in Syria by June 2014, while a further 9 proposed or rumored deals were pending. In fact, Integrity’s report found only 2 broken or failed localized truce agreements. 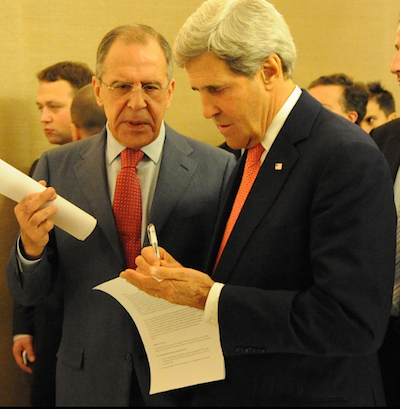