Home » Commentary » Arsenal Pulse » After the Battle of Kobani

After the Battle of Kobani

On January 25, John McCain attacked President Obama’s air campaign at Kobani as pointless and ineffective. A day later and some 700 airstrikes in, we got the news: “Kurds push Islamic State out of Kobani after four-month battle” (Reuters).

A week later, journalists were able to access the city at ground level and interview or photograph those re-entering and those who had remained the whole time. Here are two such feature articles I want to highlight…

“In Liberated Kobani, Kurds Take Pride Despite the Devastation” — The New York Times

Standing just inside the gate that separates Kobani from Turkey, Mohammed Jarada, a fighter guarding the post, savored the recent victory and shrugged off the costs. “This means that the Kurds exist,” he said. “We exist.”﻿

See also: “Inside Kobani: Bodies of Isis militants lie in rubble on shattered streets [Graphic images]” — International Business Times / AFP Photos. The graphic images are blurred and you can skip past them. The rest of the photos are eerie but worth examining to see the catastrophic destruction of an obliterative siege. It’s a wasteland inside the city. Even World War II photos of bombed out cities don’t look this bad. People won’t be able to return for a long time (even if ISIS weren’t still right nearby in the outlying suburbs and villages) because of how much rubble there is and how many buildings have been destroyed. 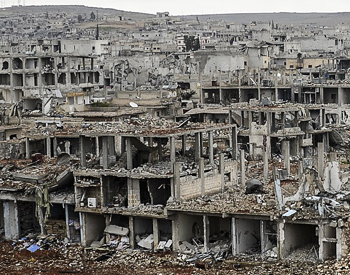 A low-res close crop of the destruction inside Kobani, stretching toward the horizon, captured by AFP’s Bulent Kilic. Full image at IB Times.

Flash back to September 18, 2014, when our blog began coverage before most outlets realized it was going to become a decisive stand that could break the momentum of ISIS: “ISIS tanks move on Kurdish enclave in Syria”

An armor-supported ISIS division in northern, central Syria has launched an offensive to seize territory from one of the three major Kurdish enclaves in Syria, which have been largely separate from the primary civil war for the past couple years.
[…]
ISIS tank units attacking Kurdish areas in northern, central Syria seem like a pretty tempting target for American-led coalition airstrikes on ISIS forces in Syria, once those begin in the coming weeks.