Today, in Massachusetts it’s Patriots’ Day, a holiday on which this year we mark 240 years since the Battles of Lexington and Concord on April 19, 1775 — depicted with some artistic license in the Capitol frieze currently featured at the top of this website.

For those of you not fortunate enough to be from Massachusetts, that was the day that the great and democratic people of this state decided to liberate the rest of the dithering colonies from Great Britain, over a year before everyone else could be bothered to sign the Declaration of Independence.

Now here’s a photo I took last 4th-of-July Weekend of a cow next to Battle Road in Lexington. This cow is wholly unimpressed by your lack of Massachusetts-centric patriotism today. 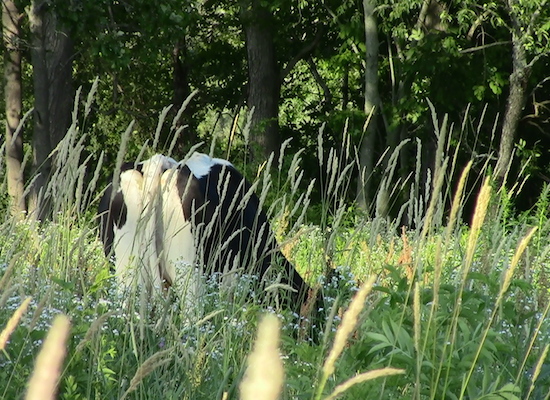 Conservatives can hate Massachusetts all they want, but that doesn’t change the fact that we shot first at the monarchy.

As a native, I can assure the rest of the country that we definitely haven’t forgotten about any of the early events leading to the Revolution. Massachusetts took a lot of the brunt of the British response before and during the American Revolution. Things like the Third Amendment are mostly about how we really don’t want British troops living for free in our houses in Boston. The American Revolution is a big part of Massachusetts history classes from grade school through high school, and the historical sites are literally all around us.

Contrary to the snide remarks of conservatives in many other states, I think we Bay Staters have a pretty solid handle on what the American Revolution was about and what unreasonable government oppression looks like. Nevertheless, Massachusetts folks by and large seem pretty happy with the progressive agenda they’ve been voting their representation into office to enact. If it were tyranny — or even mildly inconvenient, as in the case of tea taxes passed without legislative representation — we would have noticed by now.