Representation is important. This mantra is something that you’ve probably seen and heard a lot all over the internet and from many People of Color in media, literature, science, and many other fields. Twitter alone has sparked so many movements to broaden the diversity: in video games with #INeedDiverseGames, in television shows with #DiversifyAgentCarter, and in publishing with #WeNeedDiverseBooks.

There is an obvious and vocalized need for diversity in everything we indulge in. But despite the calls for it and even with the attempts by different industries to give the people what they want, there are still so many mistakes being made.

A few years ago it was announced that there was going to be a biopic about Nina Simone. (The film made its Cannes Film Festival debut in May 2014 and was recently slated for release some time this year.) The movie, we were told, would be starring Zoe Saldana. This casting choice made many uncomfortable for several reasons.

Issues like Colorism and Eurocentric beauty standards are still a very open wound amongst Black people. Nina Simone was, famously, a dark skinned woman with very “African” physical features. Having her portrayed by Zoe Saldana, a lighter-skinned woman with more “acceptable” features (by White standards), is both insulting to Simone and a dishonest portrayal. 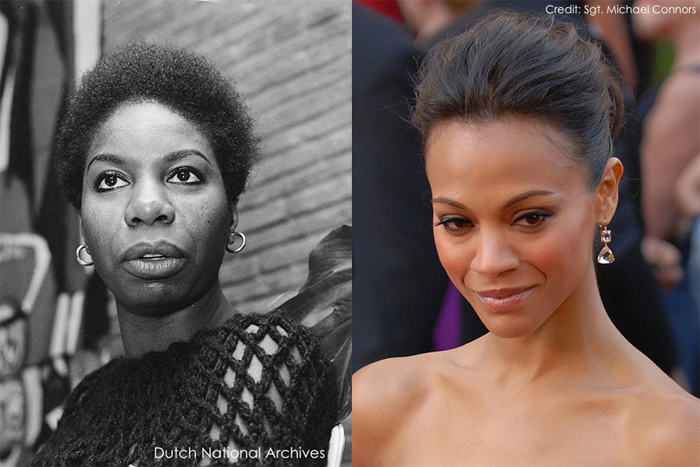 Subsequently released pictures of Zoe Saldana during filming showed her with darkened skin, a prosthetic nose, and an afro wig. These added even more insult to injury.

A lot of people will say that Saldana’s blackness should be enough, but that is still dishonest. Hollywood is an industry that already has issues with whitewashing characters of color (i.e. simply casting a White actor) and centralizing White characters in stories about People of Color’s issues. It also has a problem with how it casts characters of color in their films.

Characters that are initially described explicitly in their original novel or comic book sources as medium to darker skinned are cast with much lighter-skinned actors and actresses in the movie adaptations. Characters like Storm in the X-Men (who in the comic books ranged anywhere from medium to dark brown) and Christina in Divergent (who was described as dark brown in the books) are played by Halle Berry and Zoe Kravitz respectively, who are both very light skinned actresses.

People of African descent across the diaspora come in a wide range of skin tones in real life, but it seems that Hollywood only wants to present the section of the spectrum that is palatable to White people. This continues to reinforce the painful social norms, even within Black America, that have often prized lighter skin tones over darker.

In a film about Nina Simone, a woman who was well aware that her Black features were offensive to the White gaze, it’s impossible for the creators to not understand that this would be an issue. Yet the solution that they came to — based on the photos we’ve seen — made the situation worse. Darkening Zoe Saldana’s skin and having her wear a prosthetic nose is akin to, if not blatantly the same as, blackface.

Although the film is meant to honor the late singer, you can’t ignore the original history of blackface and how it was used to humiliate and mock Black people — and explicitly linking the darkest skin tones to other negative tropes. And yes, it was even performed by Black people, putting down those who looked the least like the majority-White society.

To ignore this context when making a movie about a woman whose life was shaped by her blackness — indeed her dark-skinned blackness specifically — isn’t honoring her life and legacy. It’s ignoring it.

Representation is important, but dishonest representations do nothing to break the status quo. It’s not enough to have one small portion of the blackness spectrum — of appearances and, by extension, life experiences — be what represents all of us.