Home » Commentary » Arsenal Pulse » The surge is a lie. A really dangerous lie.

The surge is a lie. A really dangerous lie.

The mythology of the Iraq War “surge” has been driving me bonkers for years — since at least as far back as 2009 or so, I think; I can’t remember exactly when I started getting into huge arguments with Republicans about it, but I remember a lot of arguments.

The surge was self-evidently a total failure even then, if you measured it by George W. Bush’s own stated objectives: suppress the violence long enough for a political solution to be reached.

As usual, like they did at every point in that war, the administration moved the goalposts to include only the first half (violence reduction) after the second half didn’t work (no political solution) — and many Republicans thus incorrectly believed it had been a success (because the violence was briefly suppressed). Unfortunately, it was an indivisible twin mandate, with the second being vastly more important and meaningful. Achieving the first part without the second can only be read as an expensive and bloody prolonging of the existing failure.

In a comprehensive article for The Atlantic entitled “The Surge Fallacy”, Peter Beinart makes the same point I’ve been making for years now — and extends out the hugely frightening consequences of the myth taking hold in place of the reality so quickly:

Above all, it’s the legend of the surge. The legend goes something like this: By sending more troops to Iraq in 2007, George W. Bush finally won the Iraq War. Then Barack Obama, by withdrawing U.S. troops, lost it.
[…]
In the late 1970s, the legend of the congressional cutoff [as a purported cause of failure in Vietnam]—and it was a legend; Congress reduced but never cut off South Vietnam’s aid—spurred the hawkish revival that helped elect Ronald Reagan. As we approach 2016, the legend of the surge is playing a similar role. Which is why it’s so important to understand that the legend is wrong.
[…]
In 2007, the war took the lives of 26,000 Iraqi civilians. In 2008, that number fell to just over 10,000. By 2009, it was down to about 5,000. When Republicans today claim that the surge succeeded—and that with it Bush won the war—this is what they mean.

But they forget something crucial. The surge was not intended merely to reduce violence. Reducing violence was a means to a larger goal: political reconciliation. Only when Iraq’s Sunni and Shia Arabs and its Kurds all felt represented by the government would the country be safe from civil war. As a senior administration official told journalists the day Bush announced the surge, “The purpose of all this is to get the violence in Baghdad down, get control of the situation and the sectarian violence, because now, without it, the reconciliation that everybody knows in the long term is the key to getting security in the country—the reconciliation will not happen.” But although the violence went down, the reconciliation never occurred.
[…]
The problem with the legend of the surge is that it reproduces the very hubris that led America into Iraq in the first place.

He then cites various harebrained Republican proposals to invade and occupy pretty much every country in the region based on the premise that the Iraq surge was a huge success and more troops = more success.

Less discussed perhaps is how President Obama, while taking much of the wrongful blame for “losing” a war that was already long lost in Iraq, seems to have managed to validate much of the mythology by trying to apply the surge approach (twice?) in Afghanistan with costly non-results.

But that ship has already sailed. In contrast, there is no need for the United States to make the same errors elsewhere going forward in the coming months and years. Misunderstanding what happened in Iraq after 2006 is likely to ensure a repetition of catastrophic mistakes. 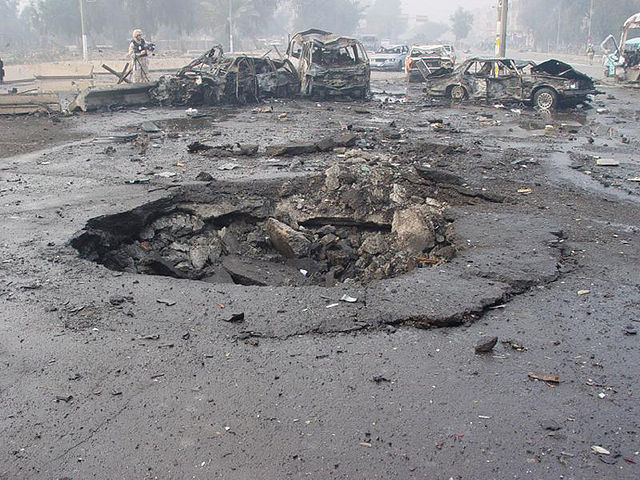 Pictured: A December 2007 suicide car bombing in Baghdad during the surge. (Credit: Jim Gordon via Wikimedia)