Following Poland’s recent lead with re-mobilizing the Home Army, Lithuania has reinvigorated its interwar paramilitary from club status to a more quasi-official force, in a bid to be prepared if Russia begins a stealth invasion to “protect” ethnically Russian residents as it did in Ukraine:

Lithuania revived its pre-WWII Riflemen’s Union to help deter the threat of both conventional and hybrid warfare. The citizens’ militia boasts over 8,000 members in the nation of three million people, a number almost on par with its 8,000 military personnel and 4,500 reservists.﻿

Technically, at least according to Wikipedia, the latter-day Riflemen’s Union has been around since Lithuania’s departure from Soviet control, but — as with similar forces in Poland — it had been a small, informal organization until its recent elevation.

Not mentioned in the article quoted above, however, is the note from the Wikipedia page that most of the members under the club version were teenagers or “youth” members. That means they would essentially be child soldiers if actually deployed to resist a Russian intervention.

The group has been hoping to recruit more (adult) members since last summer, in light of recent events. Estonia’s paramilitary recruitment reportedly swelled significantly in the aftermath of the Crimea annexation.

The Baltic states, now part of the European Union and NATO, are particularly worried about the prospects of a secret Russian invasion. They were the last to be annexed to the Soviet Union and the first to try to leave it after the Berlin Wall fell, and (like Ukraine) they still retain large Russian minorities. Plus, they have already faced electronic attacks from Russia in the past.

While a full-scale invasion is improbable now, hybrid meddling and destabilisation tactics designed to test NATO’s commitment to collective defence are not.

Putin’s brand of hybrid warfare also relies on “misinformation, bribery, economic pressure”, which are designed to “undermine the nation”, according to Latvian Defence Minister Raimonds Vejonis.﻿

One has to wonder, though, whether the climate of fear being created — even the semi-regularization of somewhat questionable paramilitary forces — is already undermining these nations without a single shot being fired or paratrooper being landed. 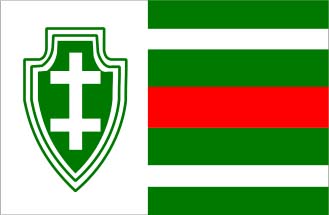 Flag of the Lithuanian Riflemen’s Union (via Wikipedia) 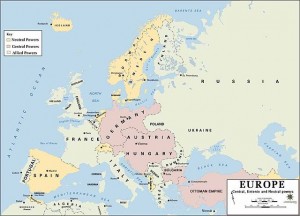