From “AT&T Helped N.S.A. Spy on an Array of Internet Traffic” in The New York Times:

Fairview is one of its oldest programs. It began in 1985, the year after antitrust regulators broke up the Ma Bell telephone monopoly and its long-distance division became AT&T Communications. An analysis of the Fairview documents by The Times and ProPublica reveals a constellation of evidence that points to AT&T as that program’s partner. Several former intelligence officials confirmed that finding.
[…]
In September 2003, according to the previously undisclosed N.S.A. documents, AT&T was the first partner to turn on a new collection capability that the N.S.A. said amounted to a “ ‘live’ presence on the global net.” In one of its first months of operation, the Fairview program forwarded to the agency 400 billion Internet metadata records — which include who contacted whom and other details, but not what they said — and was “forwarding more than one million emails a day to the keyword selection system” at the agency’s headquarters in Fort Meade, Md. Stormbrew [another program] was still gearing up to use the new technology, which appeared to process foreign-to-foreign traffic separate from the post-9/11 program.

In 2011, AT&T began handing over 1.1 billion domestic cellphone calling records a day to the N.S.A. after “a push to get this flow operational prior to the 10th anniversary of 9/11,” according to an internal agency newsletter. This revelation is striking because after Mr. Snowden disclosed the program of collecting the records of Americans’ phone calls, intelligence officials told reporters that, for technical reasons, it consisted mostly of landline phone records.﻿

One of the other issues discussed is that the NSA has been scooping a lot of emails (or fragments of emails) of people unrelated to intended searches because the emails are transmitted in blocks of information pieces before being re-assembled at the destination, so the target emails are probably mixed with everyone else’s emails at the interception points.

There was also a lot of discussion in the article about how AT&T and Verizon were making infrastructural repairs for the NSA overseas.

– Is it wrong for the NSA to spy on non-allied governments and foreign politicians?
– Are state voter ID laws unconstitutional under the 26th Amendment (the right to vote at age 18)?
– What are the implications of the Hobby Lobby ruling?

– NDTV: US Hopes National Security Agency Surveillance on BJP Not to Impact Bilateral Ties
– AFD: Australia was spying on Indonesia

John Oliver’s first interview on his new show: the head of the NSA. Oliver is already brilliant, just as he was when he guest-hosted The Daily Show last summer. This video is well worth your time.﻿

I really almost choked from laughing when Oliver went off about the deeply misguided “needle in the haystack” metaphor.
Read more 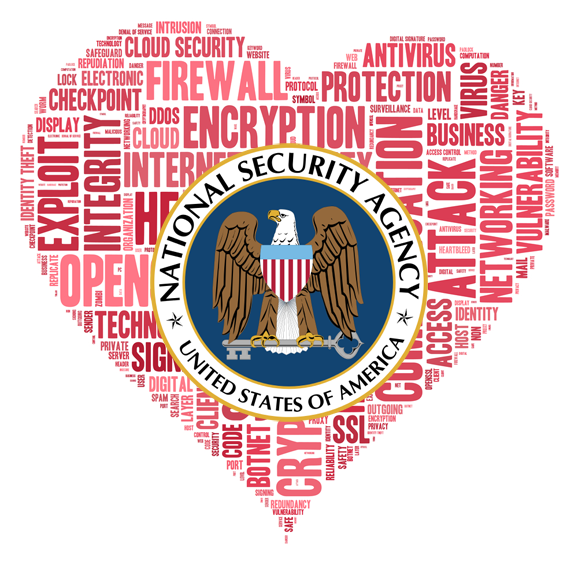 Hey guys, remember how the NSA is actually beneficial because they help American corporations shore up their data and networks against vulnerabilities when they find them?

OH WAIT JUST KIDDING. Turns out the NSA knew for more than two years about the massive multi-year year cybersecurity breach, known as Heartbleed, affecting most of the internet and they decided not to tell anyone about it so they could snoop more easily.

To target a few, they endangered us all. Really makes one question their priorities and utility.

Steve Rogers, we need you.

A Forbes blogger flagged an interesting passage in the latest NSA revelations released by Der Spiegel:

Sometimes it appears that the world’s most modern spies are just as reliant on conventional methods of reconnaissance as their predecessors.

Take, for example, when they intercept shipping deliveries. If a target person, agency or company orders a new computer or related accessories, for example, TAO can divert the shipping delivery to its own secret workshops. The NSA calls this method interdiction. At these so-called “load stations,” agents carefully open the package in order to load malware onto the electronics, or even install hardware components that can provide backdoor access for the intelligence agencies. All subsequent steps can then be conducted from the comfort of a remote computer.

These minor disruptions in the parcel shipping business rank among the “most productive operations” conducted by the NSA hackers, one top secret document relates in enthusiastic terms.

Now which terrorists and drug-traffickers are stupid enough to buy computers online at all, let alone in their own names?

I would have thought that in “Terrorism 101: Intro To Not Getting Blown Off The Face of the Earth by America” they would have said, “hey, you should pay in cash, offline, through third parties” or something to that effect.

Maybe this kind of “surveillance” is why we usually seem to catch the dumbest of the dumb, rather than the evil genius terrorists.