Home » Commentary » Arsenal Essay » More Than A Hairstyle: The Resurgence of Natural Hair

More Than A Hairstyle: The Resurgence of Natural Hair

It’s hard for some to believe that something so simple as hair could be so political. It’s something we all have, and seems to be a topic more fit for fashion magazines than serious debate. However for Black people, the subject of hair can be a very sore topic. From tignons to hot combs to chemical straighteners, Black women have been at best enthusiastically “encouraged” and at worst lawfully obligated to alter or even hide their hair to be considered acceptable in society.

Recently, with the rise of YouTube videos and loads of resources on the internet, many Black women have decided to ditch the straighteners and go back to natural hairstyles. ‘Locs have made a comeback in a big way, but more Black women are increasingly enjoying their unbound hair, in the form of twist-outs, braid-outs, wash-and-go’s, and many other different styles. You can find tutorials on YouTube for specific styles, natural hair care blogs for maintenance, and ever ask for advice on Twitter about dying or temporarily straightening your ‘fro without doing the extensive damage that would happen before.

More and more Black celebrities are also showing off their natural hair to the world. Artists like Janelle Monae and Solange are known for their long coils and have no shame wearing them out in public for all to see. 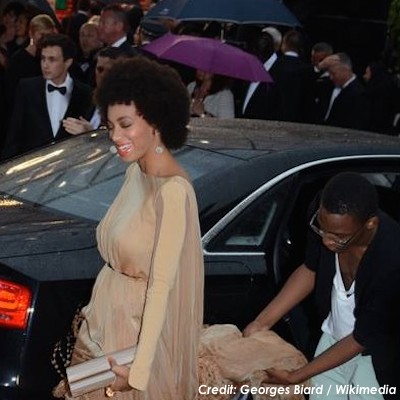 Although more Black women are embracing their natural hair, there’s still a stigma about whether or not it is considered presentable or professional. In 2012, after responding to a racist comment about her wearing her natural hair on television, Rhonda Lee was fired from her job as a TV anchor. In 2013, a girl in Florida was told that she would have to cut her afro or be suspended from school. Last year, U.S. Army regulations that seemed to discriminate against natural Black hair types for female troops also earned a scathing Daily Show segment by Jessica Williams, before they were revised.

Most recently, the French magazine Public referred to Solange Knowles’s afro as “coiffée comme un dessous de bras” which translates into English as “hair done like armpit hair.” The article went viral on Twitter, and user @huegolden started the hashtag #TwitpicYourCheveuxCrepus encouraging people to post pictures of their natural hairstyles. Both English- and French-speaking Twitter users shared pictures of their hair, sending the message to the public that Black hair types are just as beautiful as any other hair type.

But it isn’t just Black hair styles that is the problem; the actual problem seems to be the bodies that the hairstyles are attached to. Earlier this year two starlets wore temporary “faux ‘loc” styles and got two very different responses to them. Kylie Jenner, one of the younger sisters of the Kardashian clan, revealed her temporary ‘locs on her Instagram page and was immediately lauded as a trendsetter for her “edgy” new look. A few weeks later at the Academy Awards, Zendaya, a young Black actress, was mocked for her decision to wear faux ‘locs to the show.

The idea that Black hair is unprofessional, unpresentable, or even dirty stems from racist stereotypes and a complete lack of understanding about Black hair. While you can go almost anywhere and find a salon that works with straight hair, salons that work with Black hair textures are almost impossible to find outside of Black neighborhoods, and salons that work with natural hair and not just straightened Black hair are even more niche. It’s that level of isolation that leaves most White people clueless about and prejudiced against the many different kinks and coils that make up Black hair.

It seems, though, that the tide is turning in favor of natural hair, as more and more women elect to wear their curls out, and more and more companies are coming out with products for non-chemically straightened Black hair.