Home » Commentary » Arsenal Analysis » Is the US trying to build a new case for war in Syria?

Is the US trying to build a new case for war in Syria?

Various hints become more concrete today as the U.S. Chairman of the Joint Chiefs of Staff suggested that ISIS could only be stopped by entering the Syrian civil war directly:

Gen. Martin E. Dempsey, the chairman of the Joint Chiefs of Staff, said Thursday afternoon that it would not be possible to defeat the Islamic State in Iraq and Syria without attacking its fighters in Syria.

General Dempsey, speaking at a news conference with Defense Secretary Chuck Hagel, did not commit the United States to carrying out airstrikes in Syria, and the Obama administration’s broader strategy for defeating the Sunni militant group remained unclear.

Although I think it’s fair to say that acting against ISIS in Iraq only would not really defeat or destroy them, I also don’t think that’s an automatic case for escalating to jump into the mess in Syria. The policy so far has been a sort of updated version of the Cold War “containment doctrine,” but taking the further step of intervening in Syria (rather than just Iraq) would be a bit like the U.S. trying to contain the spread of communism into South Vietnam by attacking North Vietnam from the air. On paper, it may have made logical sense (cut the external support, contain the threat outside the borders), but we never really had a coherent plan there either — since we didn’t invade the north and we never really committed to toppling the regime or replacing it with anything — and look how that turned out.

I’m sure they think it’s a similar situation and therefore also shouldn’t be done piecemeal (like Vietnam was, which bled us out). But going into Syria at all opens the door to having to go in completely. Containment requires enough energy on its own without having to go the extra mile of ending the threat everywhere and filling the vacuum it leaves behind.

I’m particularly frustrated by the fact this is coming up again, given that members of Congress and the US public (as well as the UK parliament and British public) made very clear last August and September that they were not interested in getting U.S. forces directly involved in Syria’s civil war. On top of today’s pronouncement by Dempsey, there were claims last weekend by Syrian rebel leaders who oppose both ISIS and the Syrian government that the US had asked them to try to drum up global support for U.S. military actions in Syria. Which, combined with the official outrage over the beheading of an American photojournalist, makes this all sound like a manufactured government effort to whip up public outrage and by extension support for military actions the public rejected a year ago.

In other words: if at first you don’t succeed (in rallying public support for illegal, unilateral involvement in a quagmire by choice), try, try again … 365 days later.

I mean really. It’s been a year to the week since they started trying to drum us to war in Syria with no long-range plan, on unclear intel about a real chemical weapons attack. It was as if the specific means of attack suddenly invalidated all the sensible reasons against intervening directly in the Syrian civil war and suddenly made a long-term plan for success out of whole cloth. Did they just shelve the plan for 12 months until they could come up with something more persuasive?﻿

There are a lot of really, really strong reasons not to get haphazardly and incrementally involved in the Syrian civil war — geography, unwinnability, lack of a reconstruction plan, lack of money to get seriously involved, limited ability to help civilians on the ground, regional and global ramifications, etc. — and those haven’t really changed over the past year or so.

As I added to the arguments against intervening in Syria, last weekend, now that the U.S. has begun anti-ISIS operations in Iraq and now that Syria is split pretty solidly between the Assad regime and ISIS, with all the vaguely-American-backed fighters clearly losing:

The US can’t be everyone’s air force, but at least they can count on the Iraqi Kurds and trust them.﻿ In contrast, many of the Syrian rebel groups remain a big question mark. That makes it a tough sell to step up direct assistance to help them, which entails wider involvement in the civil war.

Moreover, if the United States strikes ISIS inside Syria at the request of other rebels, it would be harder to draw a logically consistent line against similar strikes on other targets — including the government.

There’s no real room for a serious U.S. intervention in Syria at this point, short of dragging ourselves all the way in — and even that would likely only end in catastrophe for the United States.

I also want to cite this wisdom from 6-term California Democratic Congressman Adam Schiff about remaining level-headed even when ISIS makes specific advances or provocations, which applies to both the current operations in Iraq as well as any consideration of expansions to Syria:

“We shouldn’t allow this horrible act [the beheading] to provoke us into doing things that are counterproductive,” said Rep. Adam Schiff (D-Calif.), a member of the House Intelligence Committee, on CNN’s “New Day.” “There’s nothing ISIS would like more than having us reintroduce ground troops into Iraq, for example.”

He said the U.S. “had to know that when we get involved with airstrikes, that ISIS is going to strike back at us in any way they can.”

Schiff admitted that resisting the temptation to ramp up U.S. military objectives in Iraq would be “very difficult, but I think it’s extraordinarily important we keep our focus on what we can achieve.”﻿

We should do what we can for our allies in Iraq and help them continue to resist ISIS there, but we can’t fight everyone’s wars for them. Ginning up a myopic frenzy for action in Syria is not a realistic foreign policy strategy. Especially not when the map of U.S. enemies (red and gray) looks like this: 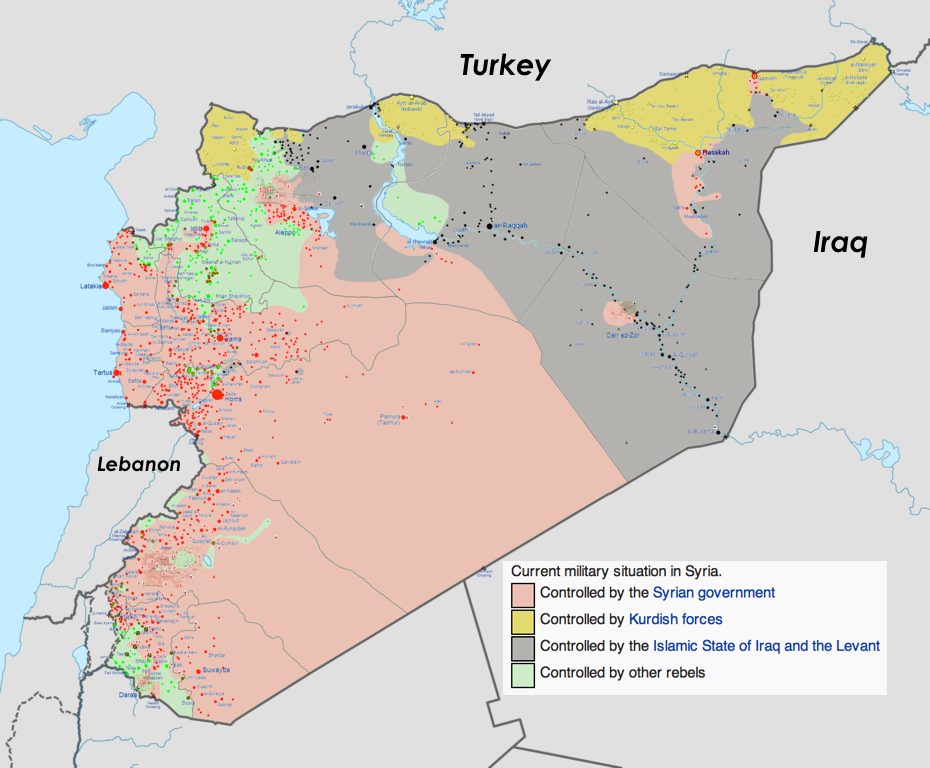 That’s a powerful assemblage of anti-American forces arrayed over a vast territory. Our allies and partners of convenience are in an ever-shrinking area. So unless we’re planning to start backing the Assad regime, invade and occupy until we lack the strength to continue, or send Captain America, I suggest we focus our attentions where they can do some measurable good for allies we actually trust (such as the Iraqi Kurds).

In the meantime, ISIS will probably either wear out its thin welcome through oppression and incompetent governance, or they will try to go it alone against the battle-hardened Syrian Army and Hezbollah, who have Russian and Iranian military aid, and it won’t be our problem anymore.